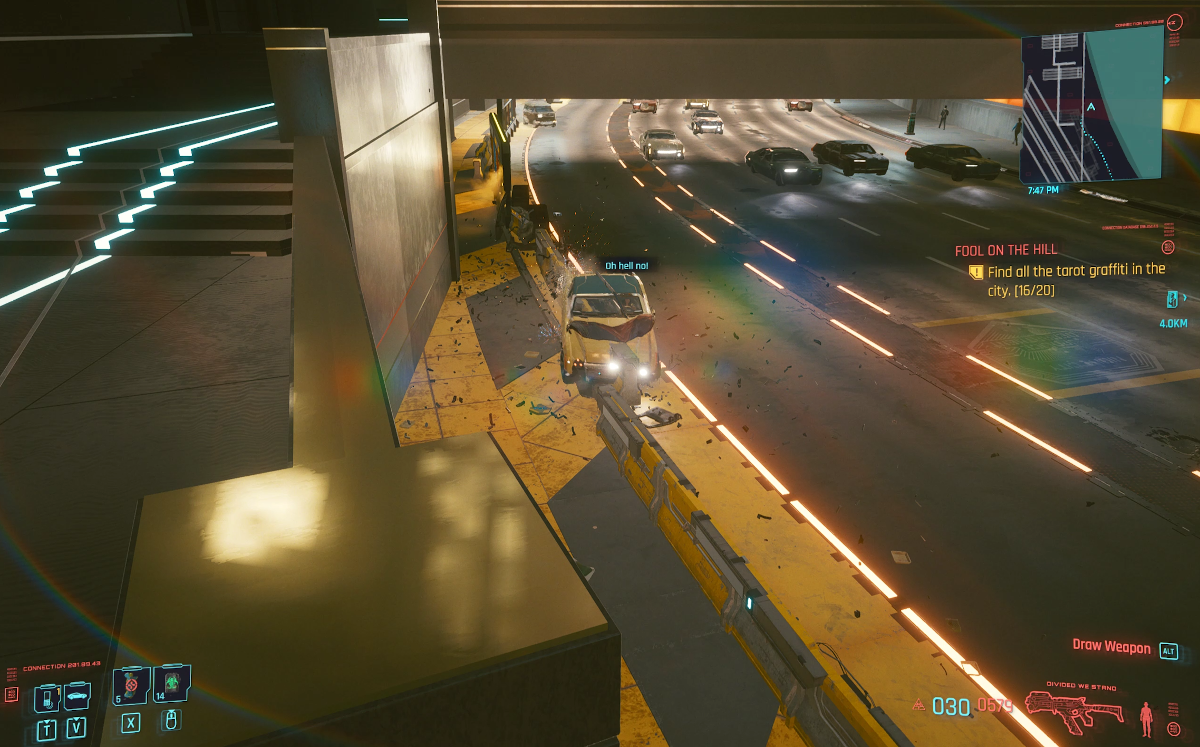 Cyberpunk, the genre, first kicked off in the late 60’s and 70’s, but it really hit worldwide awareness in the early 80’s. Broadly speaking, once it coalesced into a common narrative, most cyberpunk stories shared similar themes: megacorporations beyond the control of governments, artificial intelligence, body modification (partly in the flesh sense but more widely as cyborg), hyper-consumerism, and the ever-present accessibility of what we now know as the internet. Everything is connected, and in ‘cyberspace’ everything exists in a sort of shadow form. Or it lives there, which is cooler. These stories presented views of a grim future wherein individual choice seems limitless on the surface but only as a means to hide a deeper, more severe oppressions. Life is cheap, but at least now you have 144 flavors of ice cream. But there’s not a way out, not really. Nobody is coming to save us from ourselves, as it were.

That said, it’s interesting to look at those very early examples and pick out the bits and pieces that have come true, or are coming true. Megacorps, for instance, such as Facebook and Amazon and Google. AI and body modification, either being worked on furiously by those corporations or by others. The hyper-consumerism was already a feature by the 80’s in Japan but has become much more common in the western world. And of course there are people that view all of this as a good thing.

William Gibson’s novel Neuromancer was the start of the big boom in the series, and Ridley Scott’s film Blade Runner, flawed though it was, pushed the vision of it to the masses. Both of those continued the overall trend of portraying this as a grim future: Blade Runner‘s protagonist was tasked with tracking and murdering genetically-designed humanoids created by a megacorporation that preferred them dead rather than trying to see them as living beings. There was a boom in cyberpunk as a movie genre throughout the 80’s that were able to keep to most of the themes, such as Robocop. Even in the early 90’s Johnny Mnemonic, an adaptation of a William Gibson short story, kept a lot of it intact.

By the time of 1999’s The Matrix, however, a great deal of it had gone out the window. The megacorporate control and oppression is gone in favor of a more tenuous overlord in the form of artificial intelligences. Here the idea of the oppressive overlord is counteracted comparatively easily by a single Christ-like figure in Neo who adventures in the film’s cyberspace and inexplicably exerts control. Well, I say inexplicably, in the later films they worked hard to explain it with excessive exposition, but whatever. By this point the key tenets of cyberpunk were dead or dying, and its component parts were recuperated into the overall media narratives. It became franchises, the commentary around corporate control and the dangers of hyper-consumerism were lessened, and it was presented as a cool possible future rather than hinting at a darker destination for human society.

So, Cyberpunk 2077 is the extremely-hyped game set at least to some degree in that genre that was recently released in a strangely buggy state. It felt necessary to speak to some of the above before getting to this part because my own prior knowledge of the genre relates pretty directly to my thoughts on the game.

Before getting into the rest of it I have to address the bugs as everyone else has. Here I won’t take the time to catalog them as I have with other games, but their presence and persistence do affect the experience by adding, usually, a kind of surrealness to it. Some of them are simply aggravating but most in my experience have been strange little occurrences that I found funny. It’s distracting, and perhaps to a small degree that’s a good thing. And then you get one that properly breaks something at it’s not, anymore.

The story here goes that you, a body-modified (check) generic criminal/hired thug, are recruited into the wider life and invited on a big heist against a megacorporation (check). You wander through a world of hyper-consumerism (check) connecting to and exploiting technology connected to a generalized widespread network eventually leading you into cyberspace (check) to communicate with AI (check) to blah blah blah it’s all there.

That is to say, the key themes above are all there. They’re present, but not necessarily connected in the same way. You’re working against one specific megacorporation less due to their evil (which you are told about, not so much shown) than because they’re on the hunt for you, you having stolen something. The AI with which you spend most of your time before the end game runs a taxi company and presents no real challenging interpretation of itself aside from some side quests that offer, mostly, comic relief. The body modification is present and gives you some additional abilities, but mostly just boosted numbers to do more number against bad guys: it serves no other purpose in the game, really. I take that back, they relate tangentially to the main quest, but it would find a way to go on without them.

Which brings me to the most-hyped character of the game, Johnny Silverhand, played by Keanu Reeves. Silverhand is always present and is used to provide a lot of the commentary and side narrative: when I said earlier you were told about the corporation’s evil, he’s the one doing the telling. His purpose in both the main story and several of the side stories is important in that he adds a lot of flavor and characterization to them, but at the same time he serves as the Muse, offering narrative and 1st person omniscient (sort of) backstory for whatever’s going on. I’m of two minds about it. One, Keanu doesn’t appear to be a very effective voice actor. I know a lot of stage and screen actors have had trouble with the transition away from interacting with actors on a set and into just acting into a microphone, but the stiltedness is pretty obvious here. Two, his unique positioning in the world (which I can’t get into due to spoilers) adds a fantastic sort of, er, mechanism by which to bring you that backstory. They used the character and his situation very interestingly, mostly. He’s simultaneously the protagonist and the villain, or a secondary one, to great effect.

The overall story, as much as I’ve gotten to by now anyway, is good, but also frustratingly lacking when we reach plot points I find particularly interesting. I’ll spoil a small one. There’s a need to enter cyberspace completely in one mission. Cyberspace is a scary place: corporations and a mysterious government entity called NetWatch maintain control there and try to keep it safe, they say, from Free AIs that exist out in the wilds there. There’s a set piece called the Blackwall to keep the rogue AIs out of ‘civilized’ network space. You go to the Blackwall and see it pulsating from time to time. The character you’re with tells you that you’re seeing the Free AI trying to attack it. And then bam a couple more lines of dialogue, and you’ll never see any of that again. As a momentary set piece it was incredibly compelling and fascinating, probably the most striking in the game so far, to me. I haven’t quite finished the game but the opportunity to explore that place and those themes evaporated instantly. Maybe I’ll get another chance, but the way the other heavier spoilers around it came up, I don’t believe I’ll have a chance.

But like I said, overall there’s good there. There are sort of stakes, even if it will ultimately give you the plot armor to go as long as you need to on your mission. There’s also very real characterization and growth. Other characters around you die, and many of those instances are very stirring. You end up comforting a friend’s mother and girlfriend (the latter of which has a poignant view on the whole matter). There’s a very prominent and disturbing, yet understandable, suicide to be dealt with. There are betrayals within betrayals and the inevitable deaths that follow. There’s more characterization than I really expected from a lot of smaller individuals, and yet sometimes not enough to be satisfying.

But the waffling I keep doing on these things really sort of starts to unravel the whole of the game. Yes, there’s a tremendous amount of good fun in there; great writing now and then, too. The comparison that leaps to mind is the developer’s previous mega-hit, The Witcher 3. I’ve reviewed it, I’ve gone on at length with the positives that game offers. Much of the same style of world is present here as well, but… not enough of it. Something is lacking. In The Witcher there were great stories with great characters, and that happened at the levels both big and small. In Cyberpunk you see the similar DNA but so much of it is underutilized, or just doesn’t fit together as well. Sometimes the side stories are great, and sometimes they’re just trash.

I almost can’t put my finger on what was lacking, though. This goes back to what I was saying about the themes being present but not connected. The connective tissue of it all is, functionally, Johnny Silverhand, and they do use him to great effect. But it also disconnects the story from the gameplay, sort of. The game itself is, I’ve decided, an amalgamation of The Division (or Borderlands, though the latter had a greater fluidity to it that doesn’t seem right to me) for the combat and inventory, Grand Theft Auto 5 for the attempt at an open world design, and Deus Ex: Human Revolution for the stealth and cyberpunk-y mechanics. But it doesn’t live up to the quality of any of those (well, maybe The Division, it had a lot of its own issues). And the story doesn’t live up to that of The Witcher, though it’s not trying to emulate it.

It should be noted that a lot of the source material (including Johnny and a couple other characters and locations and plotlines) come from a tabletop RPG that was developed in the late 80’s for the setting. In that regard they’re repurposing older, more-original themes from the Back In The Day starting point before the whole of the genre began to fall apart. But it’s also not the original, core style of Cyberpunk. You can see all the markers there, but you can also watch it skip all over the deeper meanings and subtexts. They’ve lent it individual moments of gravitas via the side quests but too much of it appears to be pulled from other sources and disconnected. A quest line mirrors one of the character’s backstory in Neuromancer, just as one of the factions in the game takes a clear inspiration from a group in the same book. There are copies, imitations, without understanding. Or perhaps I’m just not seeing that understanding on display.

All of that said, in spite of the occasional frustration I still feel compelled to continue and I am enjoying myself. I don’t find it to be terrible or anything, just underbaked and somewhat disjointed. The overall narrative is well done, just imperfect. Too surface-level. It hasn’t quite created a world like they did with The Witcher, they mostly just created a map and plastered cyberpunk-y things all over it. It’s a falsified symbol, an eggshell-thin facsimilie, of the name on the box.