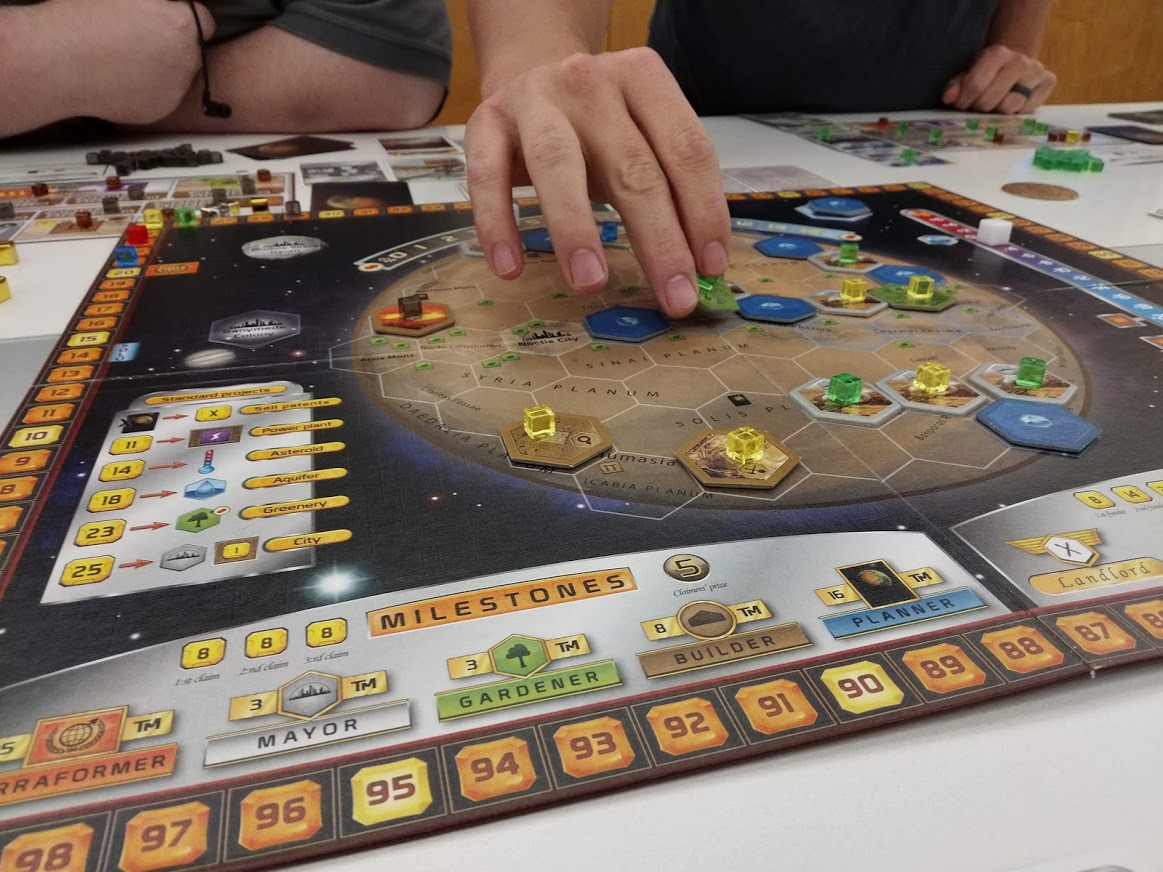 When I first played Terraforming Mars, one of the other players commented afterwards (it was his first play as well) that he found it more complex than Twilight Imperium. This is a mighty bold statement: TI is an incredibly complex game that can take 8 hours to play even for an experienced batch of players who don’t need to try to learn it for the first time. It’s legendary not just for taking so damn long, but for requiring deft maneuvering economically, militarily, and politically. I haven’t had a chance to play that one yet, but it’s easy to find aggressively-edited YouTube videos of playthroughs to give some sense of the crushing weight of it. So to look at the meager 2 hours it took us to play TM and call it more complex? That seemed surprising to me.

A month later and I see exactly where he was coming from.

Terraforming Mars is a… well let’s just break out the full lingo, it’s an engine building Eurogame of resource management and tile placement in addition to some card/set collection. Players take on the role of a semi-assigned corporation, each with its own bonuses and mechanics, to try to raise their ‘terraform rating’ by heating the planet up, placing oceans, and generating oxygen. To do all this they need money, and cities, and plants, and heat, and energy, etc., to be able to build projects and place tiles.

When you start laying out the rules to a middlingly competent board gamer, there’s nothing super complex. Ok I need these resources? Got it. I get them via these mechanisms? Right. I can buy these cards and pay to build them and I want to achieve points like this and that? Easy.

And if that was really it, yeah, it might be easy. Everything is right there in front of you and you just solve the puzzle to get the points. But that’s not it, because there’s a devil in that box. That devil is the deck of project cards you can play. You have to (mostly) pay to buy the card, and then pay (mostly) to put it into action. Each one will have some different risks and rewards, and no two cards are the same. That lack of sameness means you can’t even vaguely plan ahead before the game starts, and once its rolling, you have to re-plan sometimes every turn. Those projects have costs, and limits: you can’t drop that fancy Plantation card until after there’s a minimum level of heat, for instance. And some you can’t play after there’s a maximum level, so buying a card that you can’t play could be a total waste. Or you might have to have built more than X previous cards of a type before you can use one, which may make you desperate for some other card… desperate enough you might lose track of those missed prerequisites.

Those cards are the spoiler to the whole engine, they’re that special something that makes it so compelling and difficult. You have no way of knowing what cards will be available to you in the entire game, let alone round by round. You can’t pre-plan in any way. And the relative value of those cards change turn by turn as well. If you have a really powerful card in your hand, but can’t play it for 4 more turns while you gather its prerequisites, is it still really powerful if you can only use it towards the end? Its normal in a Eurogame to have to go back and forth and redo the math in your head to make sure you’re doing well, but the kind of complexities here are next level. To quote myself from a forum post about it:

You have to get into that hardore eurogame math to stay on top of it, or in my case I found it reminded me of building a Netrunner deck [a game where you pre-build a deck of cards to play one on one]. Ok, this card will cost me Xc, but over the long term net me Yc, but I need Z turns for Yc > Xc and it will lead to points Tp, or instead I could use Xc to play this other card and earn points Vp, which could be more than Tp if… But you don’t just do this once per card to build a deck and move on. You do it for every last card coming and going throughout the deck over a whole damn game. The equations change every turn but in way larger ways than other stuff I’ve played.

After I’d played it for the first time I went and purchased the digital edition of it, which let me play round after round after round much more rapidly than in person (allowing the computer to do all the shuffling and card drawing and whatnot speeds things up amazingly). By now I’ve gone through dozens of iterations of it, and I’ve won a very few games. Even fantastic players (which I do not claim to be at all) will find it tricky to consistently do well because its always so randomized, so dependent on what that card draw offers you. Not just this round, but next round, and next round, and next….

It really is super complex. And yet in spite of that I find it immensely compelling. The themeing is good, the semi-randomness keeps the playing field surprisingly level, and it’s just kind of nice to play. For all the confusion that crops up as you run through it you never quite feel aimless, just… unprepared? And I’ve never resented losing, aside from that one time but let’s not talk about that.

I guess I can see both why my friend had considered it to be so complex, but I can definitely also see why it’s rated as the #4 game of all time on BoardGameGeek right now.