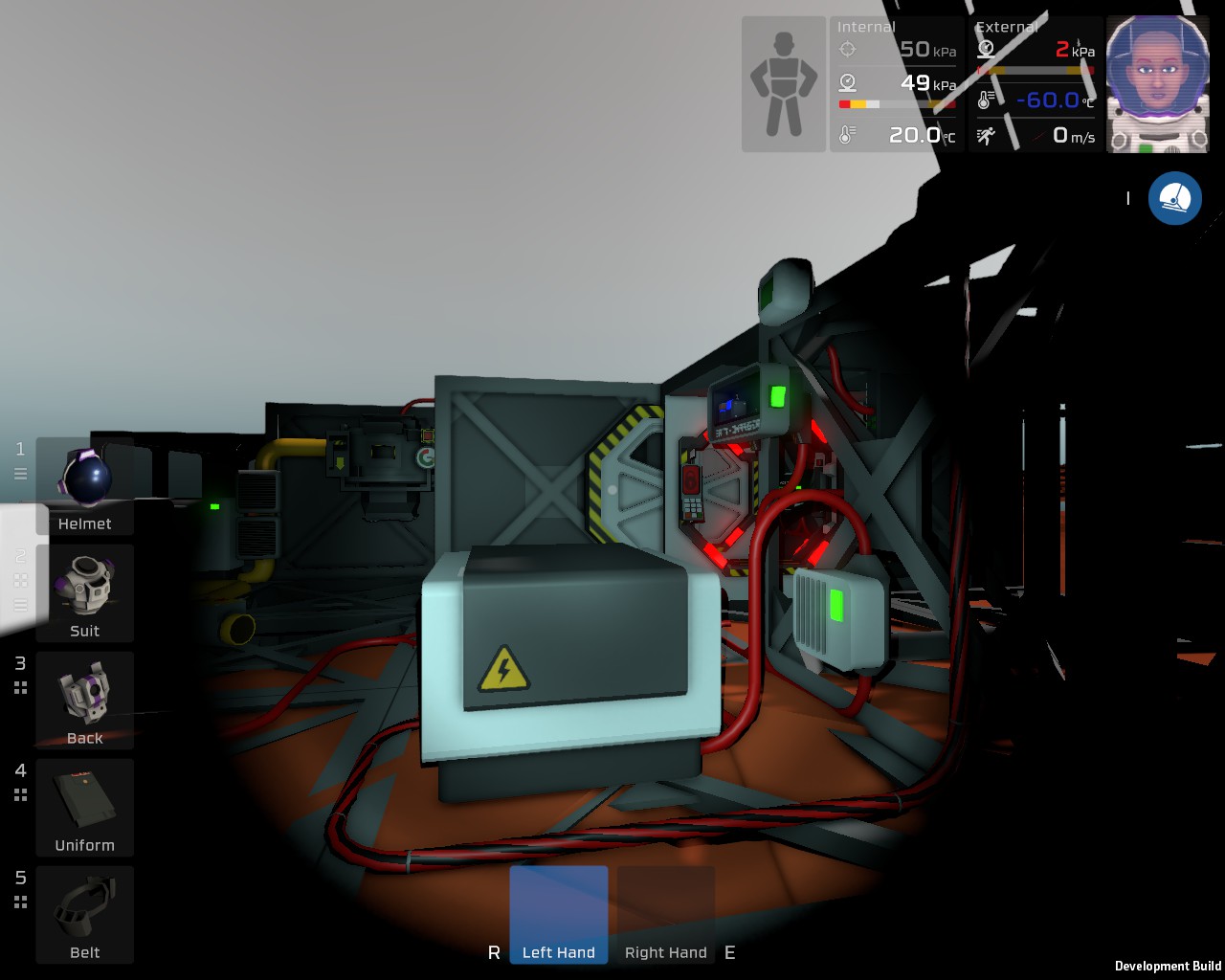 When you first load up Stationeers, you’re presented with very little with which to work. That is to say, you’re stranded on another planet, or floating in space, with a few crates of supplies, a belt full of tools, and not a damn thing else. Your critical needs will be oxygen, food, and power.

There is a tutorial, but it’s basic in the extreme and doesn’t cover how to get any of these things, just some movement basics and tool usage. Here’s an example of how to do power.

In your crates you will find iron frames. Grab them, and construct one or two. Drop them, get the iron sheets. With the iron sheets in one hand, get your welder from your toolbelt into your other hand. Ignite it with the O button. Weld ONE iron sheet onto the iron frame. Turn off the welder and put it away. Get the solar panel kit from the crate, and construct it on the top of the iron frame. Grab a glass sheet from the crate, and use it to finish the solar panel. Get your wrench out of your toolkit, aim it at the post holding up the panel, and adjust the vertical/horizontal until it’s pointing roughly at the sun, which by now is probably directly overhead. Ah and now you need to wire the power to something, so get the power controller from the crate and mount it to the side of the iron frame. It will help later on if it’s towards the bottom, and definitely make sure the IN side of it is rotated so you can easily wire towards it from the solar panel. Get the battery from the crate. In the other hand, get your crowbar from your tool belt. Use the crowbar to open the panel on the power controller. Put in the battery, flip the ON switch, and close the panel. Then use the wire from your tool belt to run it from the power out of the solar panel base to the power controller. Again, take the wrench and go readjust the solar panel to point it at the sun. Bam. Power. How you get that power out to literally any other device is on you to figure out.

Almost none of that is explained within the game itself. You get some entries on an ‘e-reader’ on your tablet, which provide some help, but by the time you figure out what you’re looking for in there you’ll probably be dead. Doing any of this rapidly means a lot of trial and error and experience at reading other people’s guides and tutorials. And even if my explanation above sounded comparatively dense, that’s still the rock-bottom-basic level of accomplishment. Note that I said you had to rotate the panel a couple of times to make it face the sun. You can either resign yourself to doing that constantly, or you can take time to build a particular crafting device, build basic electronic chips, and design your own fucking solar tracking system. Not joking at all: the most basic such system you’ll see will have a solar sensor device that reads to a ‘logic i/o’ reader, then to a separate processor that does some math based on that and a constant value you put into yet another memory chip, then to a ‘writer’ chip that sends an angle to the solar panel so that it tracks the sun for you. If you want it to track more efficiently you have to do a more effective, more complex system.

And I’ve just spent two lengthy paragraphs covering one comparatively basic topic. I haven’t touched on mining for materials or building a self-contained, airtight base or how to build a fucking airlock that requires programming a separate system. Not even going to start on the air filtration or the careful pressure regulation of the furnace, or….

You get it. This is a complex game. The learning curve is one of the most difficult I’ve ever seen. The systems implemented here are deeply interrelated and the documentation is either fan-made, or nonexistent.

Oh man do I love it.

A few years ago, while playing Kerbal Space Program, I came to the realization that I hate myself. This was because I had this habit of loading a bunch of mods that bump up the realism, but mean that actually accomplishing anything adds so much complexity that everything becomes an immense chore, and yet achieving it brings similarly immense satisfaction.

Stationeers scratches that itch for me in a big way. I do have that big solar tracking. I also have an automated system for my greenhouse to measure the internal temperature and turn on the heater if things get too cold or, more often in my case, turn on the cooler when it gets too hot. I also have an automated recycling and ore refinement system that will automatically handle everything I drop into a chute and pre-load it for me into my fabrication system for new tools. My only step in the whole process is “dump recyclables in this hole, dump raw ore in this hole, dump refined metals in this hole.” And then it’s all ready for me to do whatever.

I’m comparatively amateur at this crap, too. The process of learning has been slow, frustrating, and tedious. But I did it, I survived that long, and it’s been cool and neat to have arrived at the comparative luxury of not having to spend mental cycles on those particular menial tasks.

Even though it’s all just a game. A game where you perform menial tasks for pretend survival.

So for all I’ve said, the game is still in early release on Steam. More stuff is expected to be added, but I have to say that with 45 hours into it, I’ve already gotten my money’s worth. Haven’t even tried the mutiplayer side of it yet either.