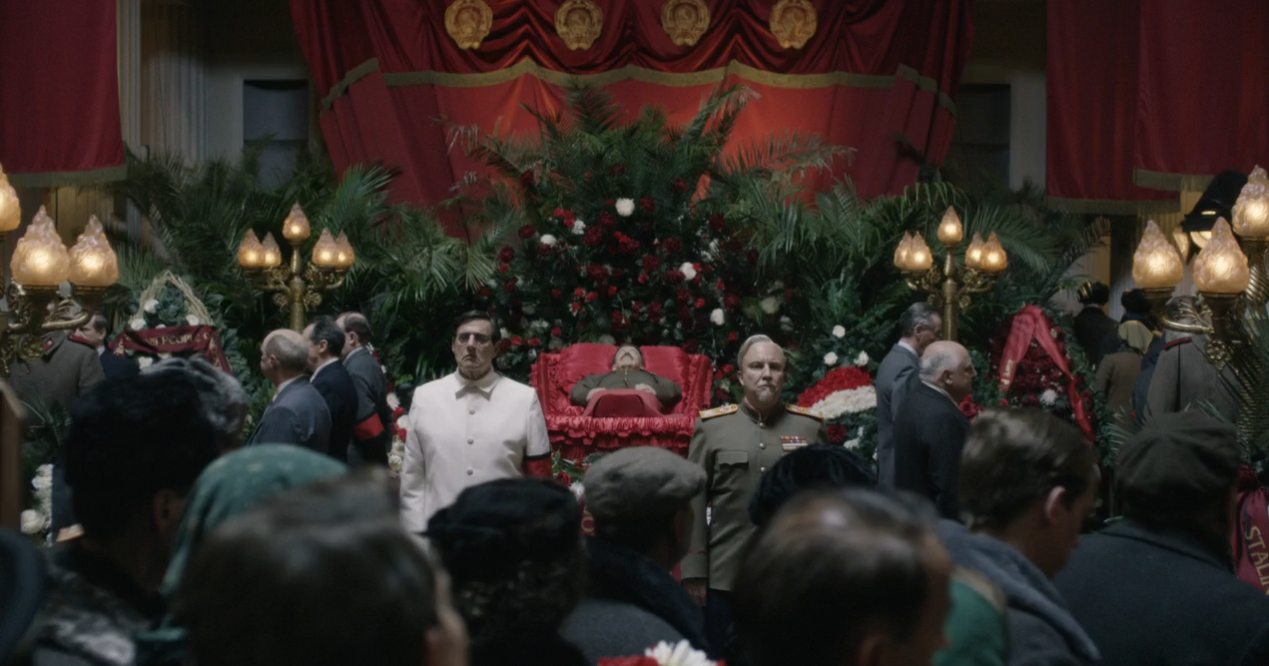 By now I’m sure I’ve made it very clear that I enjoy some darker, grimmer films. Not that everything is expected to be, of course, but they tend to grip me a little more tightly than their more cheerful counterparts. This is especially true for dark comedies.

The Death of Stalin is like a dark comedy, except for that it puts on a deliberately-thin layer of pretending to be lighter-hearted slapstick, and then when it really gets down to it, it’s not a comedy at all. But however it wants to spin itself, it’s very good indeed.

A lot of it is absolutely chuckleworthy. None of the actors make any pretense of changing their accent to something Russian-sounding, thankfully. But then with Steve Buscemi playing Nikita Khrushchev in his normal, NYC accent, paired with Michael Palin’s British, and Jason Isaacs throwing out a thick Yorkshire accent for General Zhukov (favorite character, btw), it adds a surreal comic quality to it all. That’s on top of things like the piss jokes when Stalin is dying and they find him having soiled himself, or the strange relief of a family believing they’re being raided by the evil NKVD, only to find that the father was needed for an emergency orchestral recording. Look, Khrushchev and Beria did a chest bump! Funny!

But the humor is all very surface level. It’s meant to look like they’re having a laugh with you. It’s not difficult at all to push past it and see the deep, grim reality of what they’re showing. The fact that the NKVD has been arresting and murdering prisoners, or that Beria himself has been torturing them, as a matter of daily routine is highlighted at all times. The fact that Jeffrey Tambor is playing a bumbling Malenkov doesn’t distract from the fact that his ally is the source of all of that. This isn’t meant to be a feelgood movie about a carefree time.

For all one tries to look at Beria as the villain, and Khrushchev and Zhukov as the heroes, it will make sure to remind you repeatedly that nobody here is innocent (which was also something I very much enjoyed watching Dark, but of course this is far, far worse than small town drama). The arrests and executions are on everyone’s shoulders, even those who were open after Stalin’s death that they should tone it down. The day to day terror if living in an extreme dictatorship shines through all of it.

As a film this all comes together very well, though. The initial chuckles fade away and the full force of what they’re trying to really portray hits you later on, but in the meantime all of the political machinations of its characters play out well. The first and second acts tell the tale so sufficiently naturally that the overall alliances of the two camps (which incidentally is supposedly not especially historically accurate) that it hardly matters that these are largely unfamiliar names to American audiences. And then the third drops the pretense of the humor and… well, several excellent scenes play out the grim reality of what’s been happening all along.

Anyway. I don’t think I want to keep prattling on about this one. It’s good. It’ll be hard to catch given its extremely limited release, unfortunately, but good.