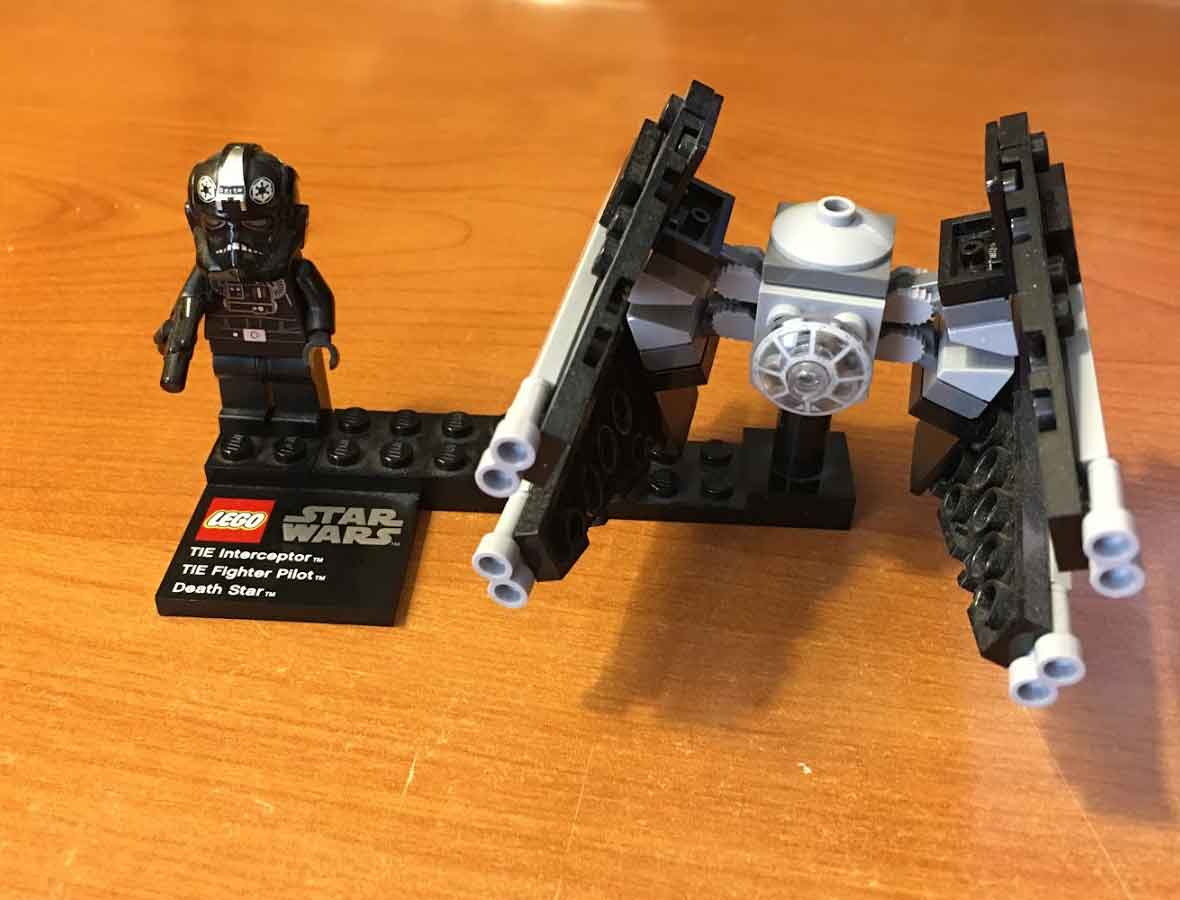 My earliest TV memory is when, probably around the age of 4 (so, 1983), Star Wars would broadcast over network channels. I’d see the 20th Century Fox logo, followed by the Lucasfilm Limited bit, and immediately go running through the house, shouting to my dad that Star Wars was on. We’d often watch together.

I have no idea how many times this scene repeated itself, but I know it wasn’t a once-or-twice kind of thing. I remember for Christmas when I was gifted the then-AMAZING Millennium Falcon playset. I had several of the action figures: Chewie, Darth Vader, C-3PO, R2… I do recall that I never had Han Solo or Luke, for whatever reason.

I remember, a Christmas or two later, when my Uncle Eddie gave me a copy of The Empire Strikes Back which he’d taped off of HBO. It was the first my-very-own-copy of a movie I remember getting (much to the relief of my dad’s hugely abused copy of TRON). Much of the family gathered around the TV to watch it that holiday. This blew my little mind: the idea that there was more to the story had simply never occurred to me. I do not remember when or under what circumstances after that that I first saw Return of the Jedi.

I do remember, to a degree, being a pest of a fan in the same sort of way my daughter has been about Pokemon and the like. There’s a memory of me sitting with my grandmother (Mary), going through one of the ROTJ movie books as if I was trying to teach her about the universe. She was very patient.

These are, of course, mostly just a handful of hazy memories. There are other flashes here and there that don’t resolve themselves into any form of narrative. The Droids cartoon, and to a much lesser extent, Ewoks. Oh, and I do recall seeing the Ewok Adventure TV movies and wondering just what the hell they were.

Back to the present for a moment. On TV just now was an ad for some sort of electric razor. In it, the guy shaving his face somehow turns into a Rebel pilot in the mirror of his bathroom, before they announce Star Wars edition shavers. It was muted so perhaps I’m missing some of the story they were trying to present, but I’m sort of dumbfounded at how silly a branding tie-in that is. But this is the second moment today where something seemingly completely unrelated dragged my thoughts back to… well, how omnipresent Star Wars had been in my life (the first was some LEGO history). These things got me thinking about some of these memories and feelings about it, and how it became both an obsession which in time ended in a rather complex divorce from that fandom, and here we are.

Next memories were from the early 90’s. My mother had gotten me a copy of the first of the Thrawn trilogy to read in the car as we drove home to Chicago for vacation. Here there was another of those moments where I realized just how much more of the story there could be: now, it wasn’t just movies. They had other people writing up stories of that world. That book (Heir to the Empire, Zahn, 1991) was the first officially sanctioned Star Wars novels, and it opened the flood gates to others. Throughout the 90s, other novels positively flooded bookshelves. It was not uncommon for me to leave the library with a stack of them (though I will say that as I got into my early teens this trend also drew me to other, often better books).

By and large, I should point out, these were trash. And I mean traaaaash. While I enjoyed many of the stories and came to appreciate a few of the authors (Timothy Zahn, Aaron Allston), others ended up being instructive to me on just what works, and doesn’t work, for writing by virtue of their sheer terribleness.

Additionally during the early 90’s, video games. X-Wing and TIE Fighter, both on CD with full voiceovers, took up an unhealthy amount of time in my day to day. Although they don’t fall into my top 10 games anymore, they were formative in a great many ways. I’m pretty confident that I could still recite several of the cutscenes from memory, if I was prompted with the visuals. “Serve the Emperor above all others…”

But I became a vacuum for Star Wars content. Although I’ve never been a comics fan, I did at least catch up now and then on their overall storylines (which tbh reinforced why I’m not a comics fan). Other games came and went, Dark Forces most notably.

This all becomes a blur again: with so much to consume at the time, those individual moments of my youth don’t really stand out against the noise. Eventually came the re-release of the original films, and then of course the prequels when I was in college.

Having been in such an obsessive state, obviously I latched onto the prequels immediately. I saw The Phantom Menace 5 times in theatres, though the followups didn’t get that treatment. I bought plenty of the dumb toys that went along with them, as a young adult. Because this was also the birth of the internet, I began finding people with whom I could obsess over ridiculous minutiae. It became a self sustaining spiral, for a while.

I remember leaving The Revenge of the Sith with my now-wife and going to eat at a nearby Chilis. I felt what I have to describe as depressed, but that isn’t quite correct. The last of the prequel trilogy was done, and now there seemed nothing to which to look forward. It felt like an end… and it was, of course, to said trilogy. But it felt like an end to my fandom as well, and as I’ve shown above, that fandom was huge. It was a significant part of me. I’m not sure how I feel about that in retrospect, but it was true at the time.

We agreed (read: I badgered her into) to put the time and effort into costuming… we joined the 501st Legion, the Imperial-themed (predominantly stormtroopers) costuming group. The logic at the time, or perhaps the rationalization, was that it was a way to keep my fandom going while possibly putting it to better use. The 501st had throughout its history spent a lot of time working towards assorted charitable projects. It seemed to me like a way to take this silly energy and put it to something more fulfilling.

We met friends, some of whom we are still in contact with. We merged this new aspect of fandom into our pre-existing routine of going to DragonCon, and some of our other nerdy pursuits.

But the time with the 501st got ugly. Humans being humans, interpersonal drama would bubble and seethe among many of them. Some members of the local group we worked with would seem like reasonable human beings, and then become unkind or, in one startling case, actively malicious towards other members. When I’d casually mention this to some of the friends I’d made in other regions they’d generally reply that oh, of course, your group is well known for those issues. But then I’d see the same sorts of behavior in their own groups: it was on display far more openly than some would admit.

It also didn’t help at the time the way Lucasfilm began treating us. They had often reached out to us to ask us to send members to one event or another: here we have a charity drive, here we have a product launch. Often these were fun. But in the few years I was there, the tone changed distinctly. It went from feeling like we were being offered these, to feeling like outright demands. This got particularly upsetting when the Clone Wars cartoon launched: they saw fit to instruct us to march with an advertising banner in a parade we typically do strictly for fun. Some members of the group felt this was appropriate, others did not. I never marched in that parade again, and after one or two more charity-focused events, we retired from it entirely.

I don’t get into all of this because I want to drag down the 501st in general: they do good things and many are great people. But of course, it only takes a handful of terrible people to hold an organization like that hostage. And at the time, particularly with Lucasfilm’s increasing demands, it felt like my fandom was a hostage there as well.

In truth, all of this is what finally poisoned that obsession. It all faded. Where it may already have been slowing down with my age, following it became an active aggravation. Erin and I had also gotten married by then, had Zoe. Although we shared Star Wars with her, the overall focus on it had dwindled massively. Since then there has, of course, been a lot more to get into, but any of the energy that I’d once had to consume all of it has almost entirely faded.

I stopped reading the novels as they came out. The new films have both been hugely disappointing to me, and I’m quite ambivalent towards the one coming out… is it next week or the week after? Most of the video games have been just plain terrible, at least to me, and I’ve stopped bothering with them. I have been watching the Star Wars Rebels cartoon and have to say, for a kid’s show, it’s certainly better than most of the rest of what I’ve seen lately.

We didn’t quite give it up entirely, however. A few months ago, since Zoe has never played a proper pen-and-paper RPG before, I’ve been leading she and Erin in a campaign as we play Edge of the Empire. That’s been fun, if at times stressful for me (and we’ve gotten out of the habit due to the holidays). I get to write my own stories for them, or help them write stories with me. I’ve also started following some other EotE podcasts of people doing the same. Which sort of… feels more wholesome to me. It’s bringing people together to tell better stories than you seem to get on screen anymore.

Maybe this is a better place for fandom to be.