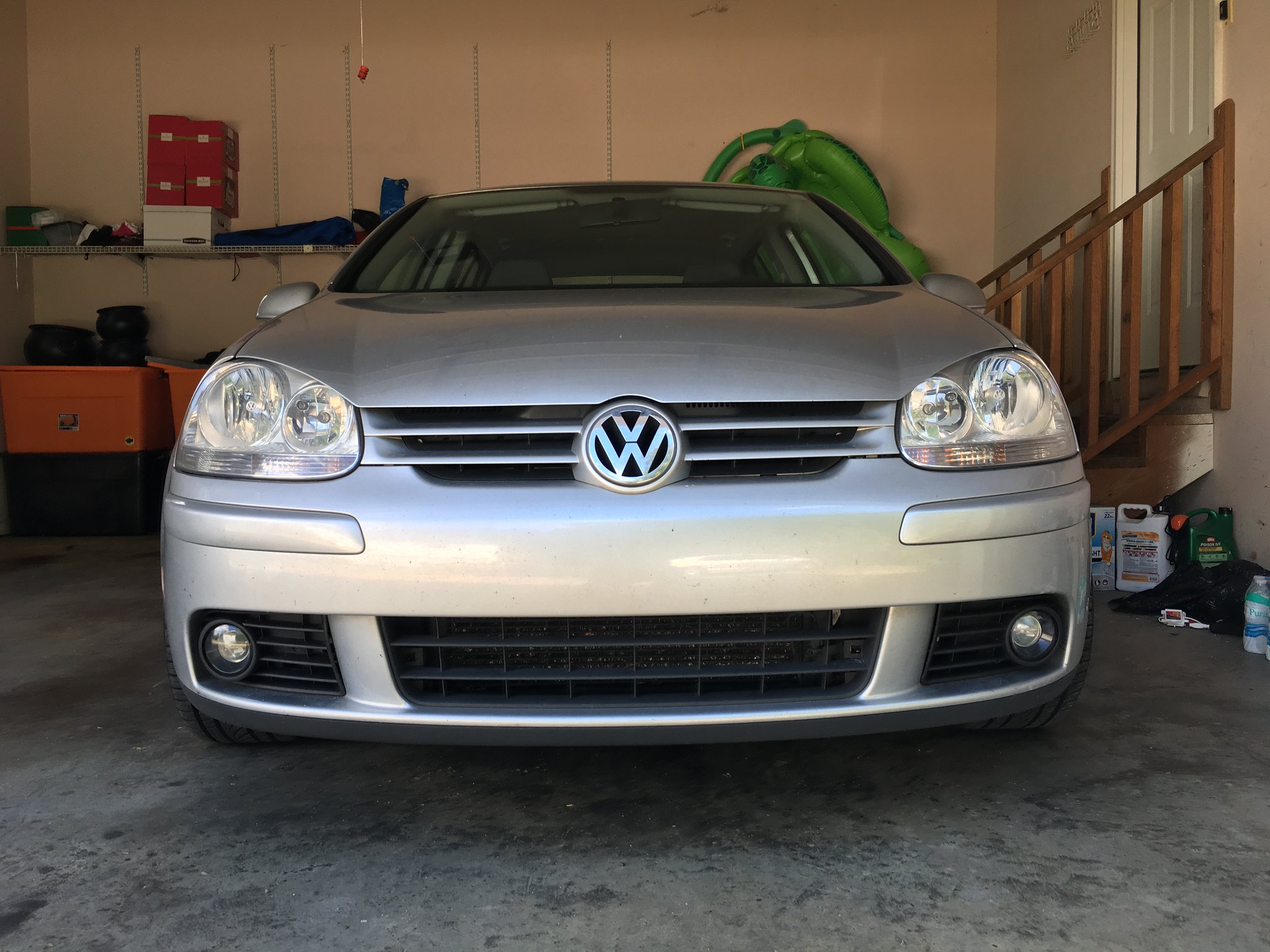 First of all, happy Father’s Day to my dad, grandpa, my damn SELF, and all the other dads out there.

My title image there is my beloved 2008 Volkswagen Rabbit. I spent my Father’s Day morning watching the end of the 24 hours of Le Mans (HOLY CRAP THAT WAS INCREDIBLE, I know it’s hard to follow a race of that length but man is it good stuff), followed by going out to work on my own car by adding the fog lights you can see there. I would not normally have chosen to do so, but was, oddly, driven by need.

Several weeks ago on my commute, some debris on the road flew up and smacked my car on the drivers side. When I got home I checked it… my side marker had popped out (they do with very light contact), but otherwise all seemed well. A couple weeks out of that, while moving the car out of the garage, the blackout piece covering the lower drivers side had popped out and I ran over it. It’s only held in with tabs (the passenger side has a screw? no, I don’t get it either). When I went looking for replacements, I found that 9/10 of said replacements expected that I’d be going with aftermarket fog lights. Ergo, I sort of had to as well. I’m not bothered by this, but I was determined to do a decent job of adding them in.

Step one, buy replacements. I did so on Amazon. This was a mistake: turned out I got a cheap Chinese replacement that had fog lights that were literally hot glued to the black surrounds. Actually rather than type it all out, here’s a link to the details of my experience left in an Amazon review. Bottom line, only the black surrounds were really salvageable. I therefore ordered replacement, good quality fog lights from another vendor, along with a custom wiring harness.

The wiring harness did not arrive in time (hasn’t even shipped yet, the problem isn’t limited to cheap Amazon resellers), so for now I have empty fog lights (no bulbs but I’ll grab some later) that are entirely cosmetic. Given that it means I don’t have empty holes on my grill I’m totally ok with that. I’ll get that later.

But the whole experience reminds me of two things.

One, it reminds me of working with my dad to put aftermarket fog lights on my now long-dead yet beloved 1993 Pontiac Grand Am GT. It’s been a very long time, but I seem to recall that we bought it with broken out fog lights at the time, and replaced them so there wasn’t torn up empty shells on the thing. It was a headache for the two of us, but we did it, and they worked well until the engine grenaded itself in July of 2000.

Two, it forces me to make a recommendation of Youtube expert ChrisFix. I have no idea what the guy’s background is, but he does excellent videos showing the hows and whys of dozens of car fixes ranging from extremely simple to what you’d think is super complex but is actually extremely simple. For example, he does a realtime replacement of a rear shock absorber on an old minivan in 6 minutes and 27 seconds, including his talking about it before and after. In his videos he’s very good about explaining the specifics of what you need to do and makes it seem (quite correctly) very easy with the right tools and a bit of knowhow.

But it’s down to the two of them… Dad’s instilling the need and desire to KNOW HOW to do shit, plus assorted Youtuve videos’ (ChrisFix’s in particular) actual knowhow for those items… for making me want to start taking on responsibility for maintaining my car, given its age and my immense fondness for it.

In the meantime, I’ve been trying to move this lesson over on my own kid, Zoe. I’ve tried to teach her the importance of trying to figure out out, and doing it yourself (as long as you’re confident you won’t make it worse than it was). I feel this is a continuation of the lessons from my dad… and that sharing them with her is as much a tribute to him as it is an education for her. I want my girl to be confident and competent, and it means more to me that I can say here that she seems to be headed in that direction.

But, following the other events of the morning, I’ve washed myself up with a bar of Lava soap (EVERYONE NEEDS ONE) and a pre-noon 40oz of my 3rd favorite beer, Golden Monkey (EVERYONE NEEDS MANY). Which seems like the best possible way to celebrate Father’s Day.