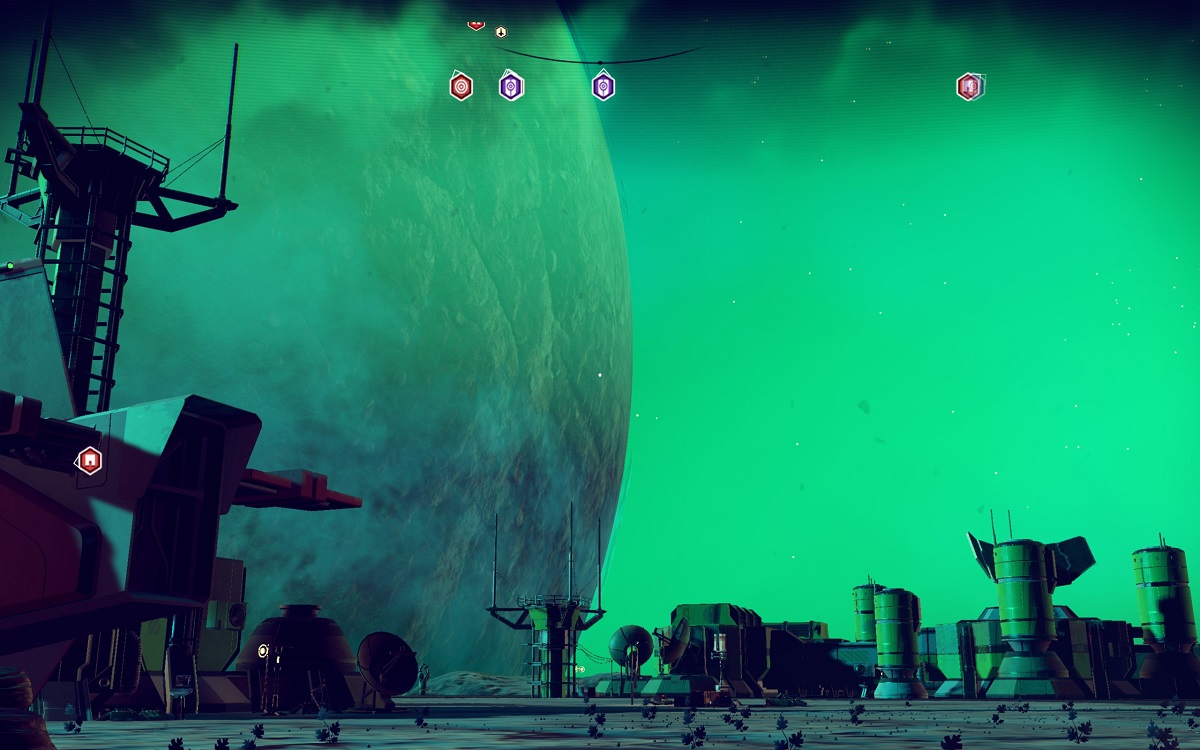 A few years ago, the first details of No Man’s Sky were revealed. Space game. You could go anywhere, see anything. Travel the galaxy. Go from star to star, planet to planet. Catalog the flora and fauna there. And no two would be the same! All of it procedurally generated on the fly, with no load screens to fight with.

This was exciting to many people. It was exciting to me too. I like exploration in my games, it’s fun and interesting. And now, after a couple of years of hype and expectations building up all around it, the game has launched. I am left wondering where all the hype came from, because it seems unwarranted.

To be clear at the outset, it’s not like I hate it. It can be very beautiful at times, and the aspect of “well let’s see what’s over there” certainly plays out in my head often enough. It launched midday Friday, and I have around 18 hours of play time in it already. Yes, really! That’s in spite of frequent crashes and bugs, which are unfortunately common for a lot of players right now.

But let’s get down to the nitty gritty. Here’s how it goes down: you start off abandoned on a planet with a broken space ship and some details on how to repair it. You run around shooting at resources with your ‘multi tool’ which is simultaneously your mining tool, your scanner, and your assault rifle. With parts repaired from raw resources (iron, carbon, plutonium… so much plutonium), you can take off and go to the space station that’s been there all along. If you want you can keep exploring. See the animals. Find tons of tiny settlements that have exactly one alien being in them. Learn the language of those beings, one damn word at a time. Gather more resources. Solve tiny, unchallenging, one-off puzzles to get minimal rewards. And then upload your survey data for money, and move on.

A moment to talk about scale, here. You could very easily spend 20 hours or so on a single planet, if you had the attention span, finding new settlements and monuments and what the hell ever. Probably much, much longer. There’s no shortage of stuff to accumulate.

What, then, is the real issue? The issue is that there’s nothing to do, sort of. I listed all those things that you can do in game, but almost all are totally meaningless, or feel so after you’ve done a few dozen. Or I should say, that’s one issue.

Another issue is that the planets are all the same. That is to say, each one is procedurally generated and therefore no two are alike, but the basic theme from planet to planet barely changes. Some are very pretty, sure, but ultimately each one isn’t any different than the last beyond minor features like whether it has life or not, or whether it’s a hot planet, cold planet, toxic, etc. They all have the same sorts of settlements in similar numbers, there are minor variations in available resources, and nothing new is to be found. The colors change, and that’s about it.

Then there’s your ship. You fly it, you upgrade it, aaaaand that’s about it. You can find new ones, either by buying them off of other critters or by finding wrecked ones to repair again. Most of them are either lame, or out of your price range. Finding wrecks is the main thing keeping me going. I found one that was cool and I fixed it up and fly it, and haven’t found another since that was worthwhile. The effort to even find them, before you know if it’s worth your time or not, really isn’t worth it.

Sigh. You can tell that I’m disappointed in spite of my ongoing playing.

What gets me above all else is just how many weird, or bad, gameplay decisions went into it. The combat’s a good example of that, it feels pointless and tacked on. But it’s missing a lot of the basics you might expect. For instance, it’s an exploration game, sure. Where the hell is my MAP? Or my journal to track what I’m doing? Why can’t I paint my ship in new colors? I can build certain upgrades for my ship, why can’t I buy them, or buy more slots to put them in? I can (sometimes) buy a new multi-tool but why are they more often given to me by an alien like it’s some sort of ritualistic prize?

Why does each settlement, space station, etc., have exactly ONE alien being? Can’t you have a few milling around? And why don’t I stumble across populated planets? There are no cities… not even ruined cities to go with the other ancient ruins that consist of exactly one small building / monument. There are trading posts where multiple ships will land and take off, which is cool, I like those. I spend a lot of time there, because they’re the only place in the game that seems populated at all. Other than the trading ships that come and go, those of course have just the one alien there.

And the worst sin of all is that each planet consists of just one feature. You know all the complaints about Star Wars having planets with only a single theme? Ice planet, desert planet, etc? Happens here too: if you find a planet with blue grass and purple sky and a lot of square shaped mountains, the whole planet is like that. There is no significant deviation. This mountain has trees, so all mountains will have trees. There’s no ice at the poles, no deserts, often no oceans or even lakes. It’s exciting the first time you go into a cave because they can be beautiful. The next time less so cuz it’s the same cave on every planet.

The net effect of all of this is that the most excitement I get out of the game is trying to find out what inappropriate terms aren’t on the game’s profanity filter so I can have planets named after assorted obscure, dirty terms. Doesn’t take as much creativity as I’d like.

There’s a tacked on storyline too, but honestly I’m trying to follow it and have NO idea what’s going on. It decides which system I go to next, I don’t know why or to what end. But I’m going with it because sooner or later something has to happen, right?

But again, I don’t hate it. There’s still that desire to know what’s on this other planet next door, what’s in the next system. And above all, whether I’ll ever find a worthwhile wreck again.

Bottom line, though, I can’t recommend it. It’s a toy, a tech demo, that someone decided to call a game and charge money for. People are already saying they hope that more content gets added and sure, I do too. But we shouldn’t have to. These are glaring flaws, worries that plenty of people (including myself) have wondered about since its earliest announcements. It’s come true.

And I was still dumb enough to pay for it. Ugh. Learn from my mistakes!