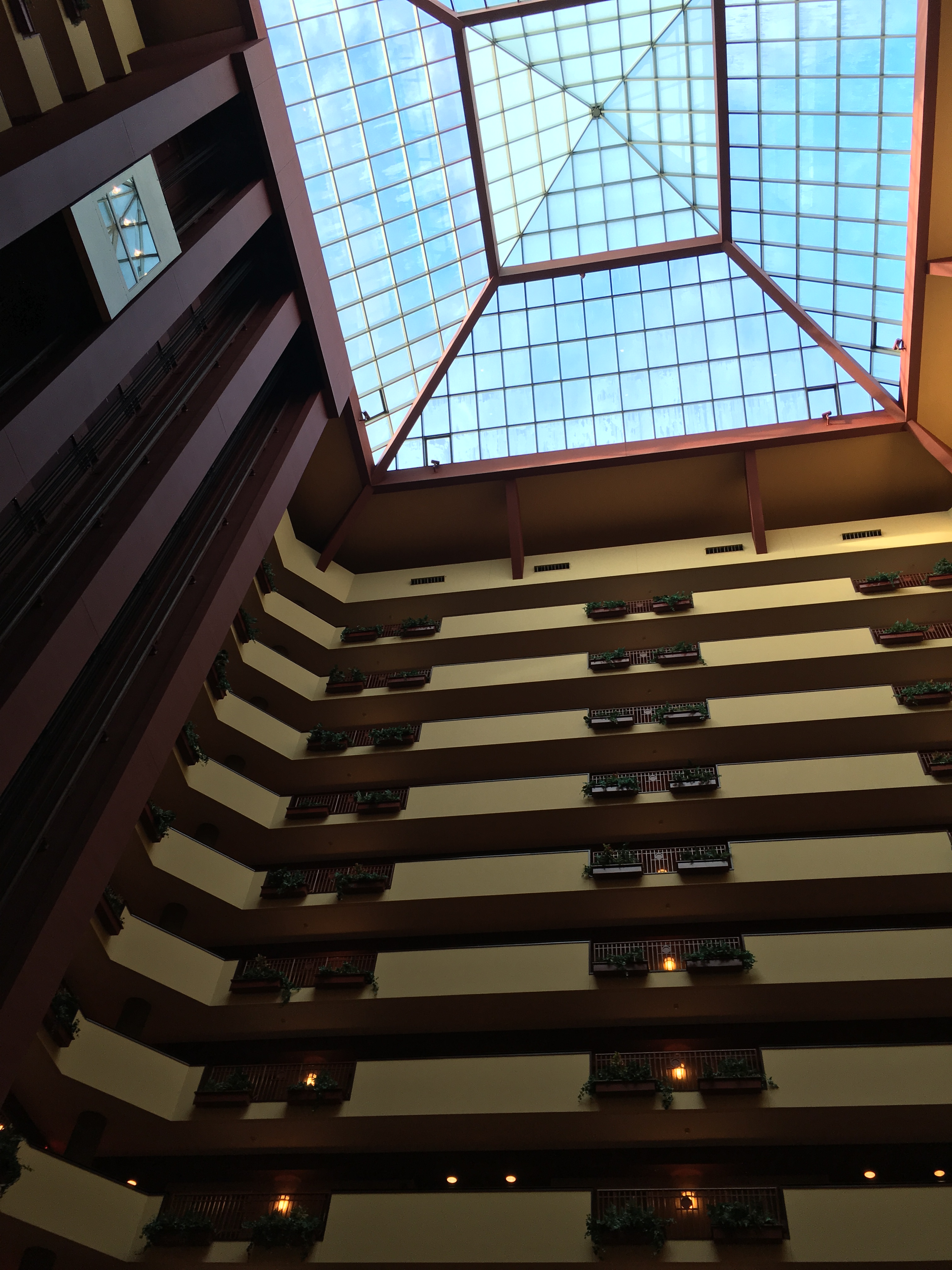 With Dragoncon now no longer a part of our annual routine, we began looking around for a smaller, less ridiculous con to hit up from time to time. Several of our friends have regularly hit up Con Carolinas in Charlotte, NC, and it earned a few recommendations. It’s calm, they said. It’s way less packed. Sounded good.

And as a bonus, we decided for the first time to take Zoe with us to a con. Dragoncon is just too crazy to bring a child to for all sorts of reasons, but perhaps this one would be better.

Before continuing, I should note that we’ve never done any cons other than Dragoncon before. Not a one. As such, and given that we’re looking for one to replace our regular Dragoncon routine, pretty much all of the comparisons will relate to DC.

Step one, book a hotel room. Easy! We got a lovely corner suite. The convention center where this is held is attached to a medium sized hotel of 11 floors and probably 3-400 rooms. There are a few hotels nearby. However, this doesn’t occur in a dense urban area like Atlanta, so everything can be a bit of a hike. There are no restaurants in the area other than the hotel restaurant that are within reasonable walking distance, but we were warned that giving up a parking space would guarantee you lose it. Troublesome. The con organizers recognized some difficulty here and arranged, for two of the three days, to have food trucks out front. This turned out to be a lovely solution to that particular issue.

Step two, pack. This was also easy: we weren’t gearing up for war like Dragoncon, with a cooler full of liquor for some hardcore partying. With Zoe in tow we kept it to a small roar in that regard. By which I mean no roar whatsoever. We also had no costumes aside from a couple of nicely patterned dresses Erin made for she and Z. So moving in and out was no trouble.

Step three, drive. It was about four hours each way, excluding stops for lunch. We made it there on one tank of gas in Erin’s car. The drive was mostly fine, though in northern Georgia and South Carolina the truckers that pull out on the two lane roads to pass another truck, uphill, blocking huge lines of traffic for MILES is a severe pisser.

Once we arrived at the hotel we found that they have a lovely little amenity in that each adult guest is entitled to two free cocktails / drinks at the bar each evening for the “manager’s reception”, where they also offer snackies. This was a lovely way to spend the evening: Zoe munching on popcorn, Erin and I with a couple of drinks, chatting with the friends who were there and generally just unwinding. This also includes a hot free breakfast, and a breakfast buffet. The buffet was not stellar. It did have bacon and some nice sausage biscuits, but only when we could actually get to it. Saturday and Sunday it was PACKED, so we had to keep it to coffee and donuts.

But here I’m skirting around the issue of the convention itself.That’s what we were there for, right? The sights, the sounds, the craziness, and that pervasive geeky energy that sustains us all when the caffeine and adrenaline have stopped!!

I shouldn’t say that, really. It was perfectly serviceable. In size they estimate it has 2-3000 attendees each year and that may be true, but it seemed smaller. Panels were nearly empty: we attended one where the three of us were half the audience for the first 10 minutes, until a few more folks filtered in. That panel was also rather bad… it was supposed to be about women in STEM jobs and was mostly just generalized career advice that anyone could have followed.

There was a dealer room, as a convention must have. It was quite tiny as I would have expected. I appreciated the fact that this meant more of the dealers were selling handmade stuff, and there weren’t so many of the huge stalls selling dumb tshirts (there was one such booth but Dragoncon would have like ten of them). But we chatted with a few of the dealers, and we didn’t feel like we were in a huge human crush at all times, so it was kind of nice in that regard.

And then there was the costume contest. We’d been warned ahead of time that the costumes weren’t gonna be stellar and that’s ok. But we thought Zoe would like to see the contest and some of the ideas people come up with. It was garbage. So garbage. The event was scheduled to last 90 minutes, and go until 5pm. They started 10 minutes late. They were done at 4pm. Costumes included Gandalf (decent, won an award), Pikachu (literally a yellow tshirt, a store bought Pikachu hat, a tail, blue jeans), a guy dressed as a TARDIS, the Joker and Harley Quinn (Harley was in the style of the new movie and was ok, Joker was lame, won an award), and a “Nyad and Dryad” (Nyad was a dress with yarn hanging off with a speaker making waterfall noises, Dryad was a bad dress with a tree stuck down the back and a speaker making tweeting bird noises, and were terrible, and won an award). I forget most of the others. But it was dire. Erin commented “wow, we can bring our C game and still be up to par with this convention’s A game”.

This is a thing I wouldn’t really want to be mean about needlessly, but… yeah, no, the costuming was primarily crap. There were a few great ones outside of the contest, actually. But when we mentioned to friends that we’d attended said contest, we were mocked.

On top of that, there was basically zero opportunity for people-watching. This is always half the fun of a convention: checking out amazing costumes or hilarious drama unfolding live in front of your eyes. There was a small amount of the latter (there always is, for some reason teenage geeks that regularly attend cons seem to save their drama for those events, it’s great), but the lack of people watching in general really put a damper on it for me.

In the end, what I realized was most truly lacking was the energy. It just wasn’t there. Everything about the whole affair was an enormous drag for me. And it seemed to be for everyone else, too. It was supposed to be a three day event, Friday, Saturday, and Sunday… but the Friday stuff started way late in the day and there was no real partying as everyone got checked in to the hotel (we arrived Thursday in proper Dragoncon fashion and it was a bit eerie how dead it was), and then everyone was checking out Sunday morning and it went completely dead (we remained until Monday, again in Dragoncon fashion, and it got very seriously weird being there with stacks of traveling businessmen who were checking in for the week). So in the end it felt like a one day convention.

We ended up spending a *lot* of time in our hotel room, which was lovely and comfortable, watching Cartoon Network with Zoe. And yet, the only thing I feel like we missed out on was the gaming. Even that I’m not too worried about, because frankly I just wasn’t in the mood for it.

Zoe loved the whole affair, even though there was so little to do. She’s talking about doing it again next year. Erin and I are going to have to think about it, because we’re both quite unsure that it was worth the time. Maybe if more of our friends were there? Maybe if we could find a more specific area of fandom to focus on with her? I don’t know.

I first started going to Dragoncon in 2001, when they had 20,000 attendees. And it was those earlier days of DC I was hoping to find, that same nerdy energy throughout, but before it had grown so beastly that everything was jam packed with bodies. I definitely did not find that here, and maybe I’m just overly disappointed by that. But then, maybe that’s not quite anywhere. Maybe it’s unique to Dragoncon, and maybe that’s why it’s grown so huge. In which case, ew.

But in the end, would I recommend it? Yes, if you want a convention that would generally be described as “sedate”. No if you want a huge thumping party. Also no if you want great costuming, a huge list of guests (Nana Visitor was lovely though), a massive dealer room, etc. Looking back, I find I am most enthused at the memory of the free evening drinks and, most especially, the food trucks. Which probably isn’t where the memories should be.