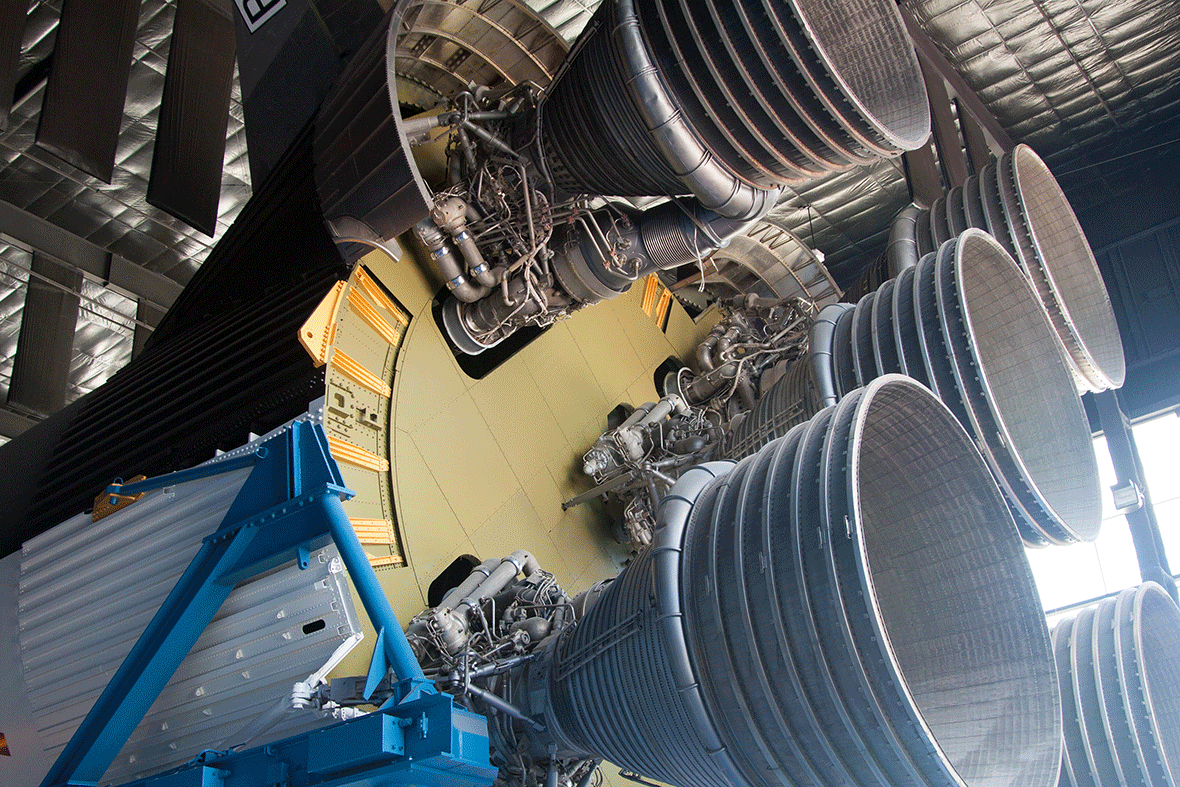 A week and a half ago I had a spare day off at the start of my vacation. Needing some time on my own and being one to enjoy a long drive, I did a four hour blast up to Huntsville to visit the US Space and Rocket Center.

Huntsville is the area where much of NASA’s work was occurring in the 50’s and 60’s aside from the launches themselves. The Marshall Space Center is still located there and it’s where Werner von Braun essentially founded the US’s space program. And I do mean founded: almost everything rocket related that NASA has ever done or even to some extent does today has been based on his rocket designs and project management. It should be no surprise then that the space center can’t go for more than about two paragraphs in their placards and explanatory walls of text without mentioning him or his work. The walkthrough even begins with staring at a replica of his office, which is cool in spite of the seeming lameness of looking at a dude’s desk when there’s several full sized rockets standing outside.

The first thing to mention about the space center as a whole, though, is that the layout is a mess. You’ve gotta arrange your stuff where you can, and rockets are, you know, huge and all, but for all their signage the layout is confusing and complex. After passing the aforementioned desk of wonder you’re dropped out into a sort of general area. One spot is for kids to go through, one spot shows a small diorama of some planned privatized inflatable space habitats… and then there’s the Apache Gunship. Well, part of one. The Army is apparently one of the big sponsors. Part of this comes in the form of a video game in a large Apache attack helicopter, staring at screens. It looked fun from outside of it. It was not fun in it. A rather large connected area was explicitly a big recruitment piece for the army under the thing guise of being about the assorted missiles they launch at people. It was quite out of tone with the rest of it.

Ah, but then you go out the door and into the blazing sun and… then you melt. Well it’s not like they can control the temperature outside. There’s a lot of old rockets standing around with plaques to show what they were and why they were important. Most were originally Army designs that NASA took over and perfected (so that they could then go back and become ICBMs). These range in size from 40+ meters tall down to the smallish test missiles from the early days. There’s also a bad mockup of the lunar lander standing on a batch of concrete that was badly molded to look like the lunar surface. And then there’s the Skylab model, and a Chinook helicopter. the Chinook had its tail door open so people could walk inside. I did briefly. Normally I wouldn’t mention this but it will be important shortly.

Anyway all of this is a big sweaty wander around to find. Then there’s a big building next door: The Davidson Center for Space Exploration. Once you find your way into that… well you still need to go upstairs which you wouldn’t normally notice to do. But then you walk in and… well the tail end of the rocket that’s pictured above is what you see. There’s a full, gloriously-restored Saturn V rocket hanging from the ceiling while loads of beautiful displays are arrayed all around it. Capsules from the Mercury and Gemini programs, profiles of the people who worked on it all, a loooooong and detailed timeline are all just within the first quarter of the length of the building. There’s also a model of Skylab, a better model of the Lunar Lander than outside, a lunar rover, and I’m forgetting plenty. But then there’s the command module for Apollo 16, and a moon rock. I was all a-titter like a little girl.

One of the things you notice when you’re done being dumbstruck by the rocketlicious majesty hovering above you is that there are people walking around in lab coats and NASA jackets. I struck up a conversation with one of the lab coat folks: turns out these people are ex-NASA scientists who turn to this as a retirement part time job. I think one of the women I saw wandering was an astronaut, though I didn’t get a chance to speak with her. Anyway, in speaking to my scientist I also asked about traffic there. It wasn’t crowded when I went and he noted that this was the quiet time, between the start of school and into winter. Most school field trips start in the spring, and then families will vacation all summer long. I’d dodged a bullet by a couple weeks.

But I mentioned the Chinook helicopter earlier and now’s the time to get back to that. As we chatted he mentioned that I was probably here for that… I said no, why? Apparently they’d literally opened that exhibit earlier in the day with a ribbon cutting ceremony and everything. He’d been told there’d be a VIP group touring through as a result, except they never got over to the BIG building. They wandered around for the outdoor rockets and never came to see the most glorious singular feat of space engineering of all time ever. I mean, why bother when there’s a couple helicopters outside? Unbelievable. Let this be a warning to you all: if you go to a museum, make sure you take in the most important of their exhibits, right? Right.

At any rate I capped off my visit with a trip to their IMAX theater and got to watch a thing about the Hubble. It was really cool, but what I remember most was a little boy a couple seats over that was constantly asking hilarious questions. “WHY DID THOSE MISSILES FALL OFF” (the rocket boosters for the Shuttle, ejected once out of fuel) “WHY ARE THOSE MISSILES GOING DOWN? IS THAT A SPACE CLOUD? OH IT’S A SPACE CLOUD. HOW DO THEY GET DOWN FROM SPACE? WHAT’S THAT THING?” It went on with his father or grandfather desperately trying to shush him. I barely remember the film at this point, aside from some great sequences with the star motions.

Anyway. From there I drove home, stopped in some tiny town in Alabama to snag a Hardees Frisco burger I could snarf on the road which was one of the most delicious meals ever for some reason, passed through Birmingham’s rush hour (it was so cute, it was like they were trying to be a big city with real traffic problems), and that was that.

I wish I could have spent more time there, but needing 8 hours of travel time in a day didn’t leave much more. There are apparently tours of Marshall Space Center too and I’d really like to hit those some day, but any further exploration will probably necessitate an overnight stay. Would totally be worth it, though.