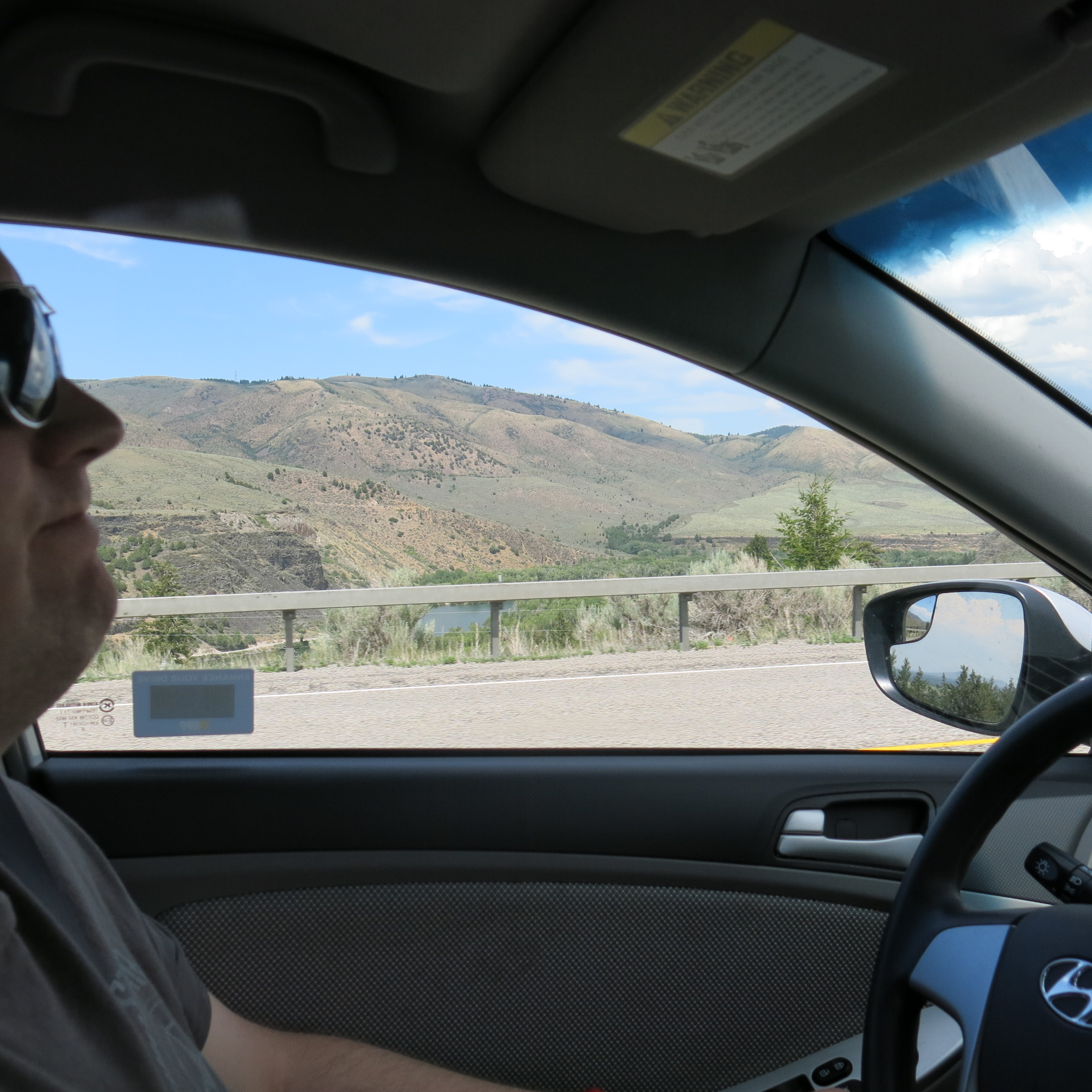 But now we get to the meat of it. Now we get to that place where the abyss of ultimate despair begins to open and you start to think you’ve made a really bad choice by just giving this little car a chance. The twin demons of regret and disappointment hold hands and tango in the darkest recesses of your heart, taunting you with the knowledge that the awesome drive you really, really looked forward to was going to be a little slice of ugly, pain in the ass instead.

You see, after that stop at the Wendys of Fate in Farr West, Utah (no really, that was the town’s name), we piled back into the car. We edged out to the drive and I prepared to hop into traffic. A spot opened wherein I had a good 100 yards before a pickup truck which was moving sedately, and I only had a few blocks to get to the interstate. I pulled out, touched the accelerator…

And that’s when it all became crystal clear. It was accelerating, if you want to go by the strict definition in physics, but the 0-60 time was looking like it’d be in the double digit range here. That pickup did indeed catch me before I was up to speed, even after giving up and flooring it. The little car grunted and redlined itself and STILL had trouble catching up to traffic.

This unfortunately became the theme. Accelerating at any reasonable pace (talking by the standards of a well-experienced Atlanta driver and therefore incredibly impatient and uninterested in little niceties like speed limits and not giving other drivers the finger), in any and all situations, required flooring the accelerator nearly completely. Pulling out of a parking lot, floor it. At 60 on the highway and needing to pass this RV? Floor it, and a ten second wait before it managed 75mph. Unless I was creeping along as if to a drive through window it was just a nonstop hunt for a power band that didn’t seem to exist.

I looked the car up later. Officially it’s a 1.6 liter 4 banger with a reported 138bhp. This is what we in the writing business refer to as a lie. My wife’s 8 year old Toyota Matrix has the same displacement engine and had 125bhp, but it never had issues like this thing. This trip proved to be more living proof that having a car with too little power is genuinely dangerous on the highway.

It’s entirely possible that the problem isn’t with the engine but is instead with the gearbox. Well, no, it’s not, but the transmission was a problem too. Later on when we had finally gotten to that nice mountain road I ran into the problem of trying to get up hills. For the cars around me, no problem. For this thing? To get up a 5% grade I had it floored, in second, and it was chugging at around 5k RPM with a horrible noise. Dropping it to third, though, dropped the RPMs to 1.5k and it just couldn’t push up the hill. This is a car that was clearly missing gears. Top Gear once reviewed this car’s predecessor and said the same: the gearbox seemed to go first, second, fifth, sixth, eighth etc. The fact that there was a DSG option available to me was initially helpful in that I could override the poor decisions of the automatic transmission on the highway, but on the mountain it was still just using the same two gears the transmission did.

The brakes? The brakes were very, very touchy in town which I did get used to and was ok. In the mountains, they were cooked. We were smelling them, and it was bad. Worse was the fact that the early-90s minivan in that horrible early-90s superbright blue which sat a couple cars ahead of us for this whole road did not seem to have this problem.

And then there’s the ride. If we hit a bump at speed the car twitched and swerved, and then I would inevitably overcorrect, and then the car would settle between those two points by bouncing and wallowing around. This was another that was both very twitchy and very wobbly. It wasn’t uncomfortable for riding in, but the actual driving suffered hugely as a result. Though not as badly as having to wear out the gas pedal was wrecking the experience.

This was a car that it was good to get out of. Not because it was uncomfortable or because my back was hurting after the 350-mile drives there and back, but because I just didn’t want to drive it anymore. It was a constant aggravation. So much so that when we did return it and the agent at Enterprise asked how the trip was, I had to point out the complete disappointment. She kindly gave me a free upgrade to a midsize next time as a result of my troubles, but knowing that’d just get me a larger edition of what I had leaves me rather reluctant to want to use it.

But with all of this I come back to the question that opened it up for me: is it the worst car, the most hated car, I’ve ever driven? I’m still having trouble being sure. If I could somehow drive the two cars back to back it’d be easier to decide. The G5 never had that issue with power, though, it just utilized it in the strangest damn way. But would that alone be enough to damn the Hyundai over it?

The G5 was a terrible rental for a business trip. The Hyundai wrecked a much-anticipated part of my vacation. That statement would send it the way of the Accent but that’s also just a matter of circumstance. What if the G5 had ruined another vacation?

In the end, no, I won’t change the title. The G5 will remain the Most Hated Car I’ve Ever Driven. If nothing else it had the advantage of being the final atrocious dribbles to plop out of the squeezed carcass of Pontiac, wasted potential washed away with a spray hose. But damned of the Hyundai didn’t give it a good run for its money (while floored and pushing 6k RPM).

As it happens, I’ve reached a point where it seems like it would be beneficial to pick a rental car agency (and airline, hotel, etc) chain to sign up with and use regularly. I’ve tried a few now, and generally I’ve been looking for decent prices, service, and not trying to screw me with bogus damage charges. But this highlighted a greater danger: a shitty fleet of cars. I think this may have ruled out Enterprise for me, though we’ll see. I don’t really rent often enough for it to be a major problem but I don’t want a crappy car to ruin a trip again, and if this is the sort of thing their fleet offers, well, not really interested.