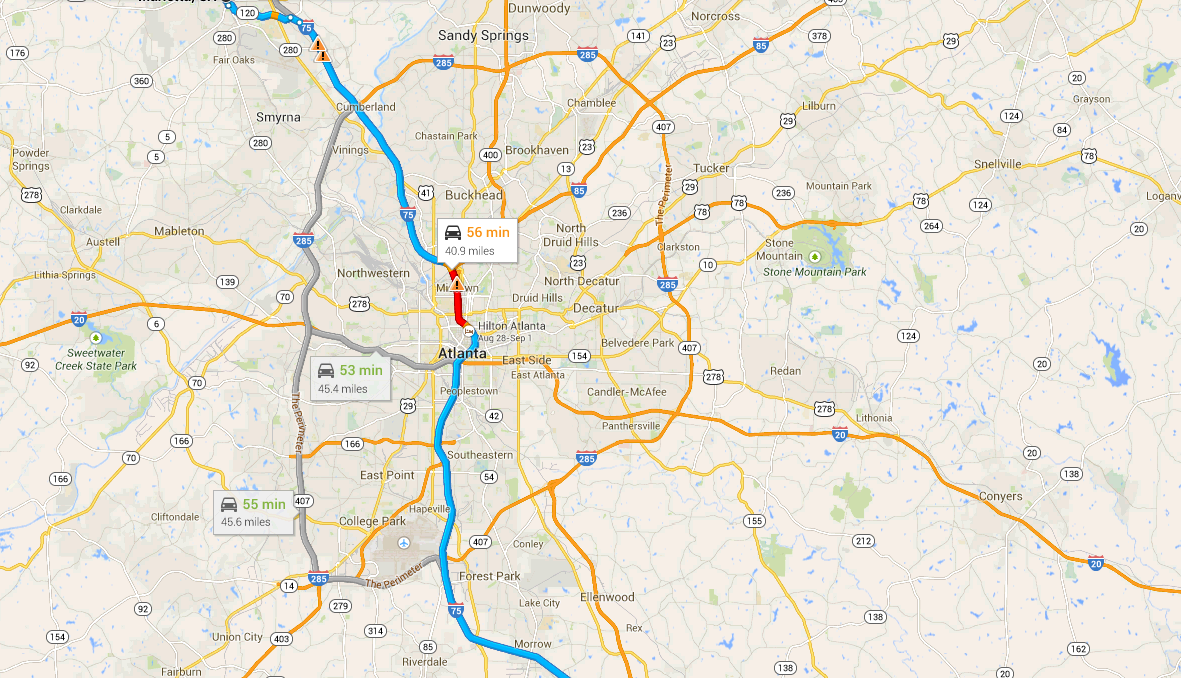 I’ve never really been the sort to want a live GPS running on my day to day commute. I have a route, I stick to my route, and if I hear ahead of time that there’s a major traffic issue on the road, I try one of my alternates. Over a city of this size there’s only so many reasonable ways to get from point A to point B. Millions of little side ways, sure, but then you’re parked at stoplights every few seconds, whatever.

A few weeks ago in a meeting we had a pair of vendor representatives in. They were out of towners and asked towards the end of the day-long meeting how best to get to the airport on the other side of the city. Our mobile product expert just said “Install Waze, W-A-Z-E, and do what it tells you.” Now, I know he knows his shit. Here was an app that would let other drivers note issues, and it’d recommend alternate routes on the fly based on their crowdsourced feedback. Given that on this particular day I was leaving the office late, and it was raining, therefore more or less guaranteeing a crappy commute, I figured I’d give it a shot.

First note, it send me down what I’d thought was the bad route for this time of day. But I went with it. Second note, the crowdsourced reports were about 75% alerts of cars stopped on the road, which is good to know I guess but not immediately helpful. Third note… then it warned me of a cop up ahead. Oh my, there he was, too. I was going too slow to be risking anything, but that was a nice feature. Ok, this just earned some additional testing time.

Over the first week it was a bit of a struggle, mostly just learning to trust it. “Take exit 20 for I-75 North…” wait, that’s not the direction I want to go. Only once I gave in and let it direct me did I find that that exit re-exited back out to my road, but better, it did so with very little traffic letting me bypass a bad-lane design choke point and saved me 5-10 minutes over a half a mile or so. It started doing the same on other roads, too.

So now about a month into it I’ve learned to love it. It’s certainly not perfect: it was aggravating to have it try to send me through a parking lot cut through that someone had marked as a road. And sometimes it doesn’t plan for traffic getting worse, so by the time I get through some of the mess my ETA is way off. This, though, is offset by letting it text my wife with my ETA so she can track my commute home, which she finds amusing but also helps her plan dinner. It also eats through battery like mad, but then, I’m using both Waze and my streaming music app at the same time, so that’s perhaps expected. I should grab a car charger.

The most interesting piece of the experiment, though, is that I find it’s sort of corrected a few route issues for me. I mentioned those interstate exit shortcuts above, but it also tweaked my surface street routes a bit to shave off some time there. It also sends me on different routes often enough that I think it’s trying to determine what works best for me. Sometimes we get a good one, sometimes not.

At any rate, I have to recommend it for anyone with a smartphone and a commute. It’s free, it’s actually oddly fun, and there’s enough other Wazers (at least around here) that it’s pretty rare that I spot a cop I wasn’t previously aware of. Of course, when I do, I report them for the next guy.