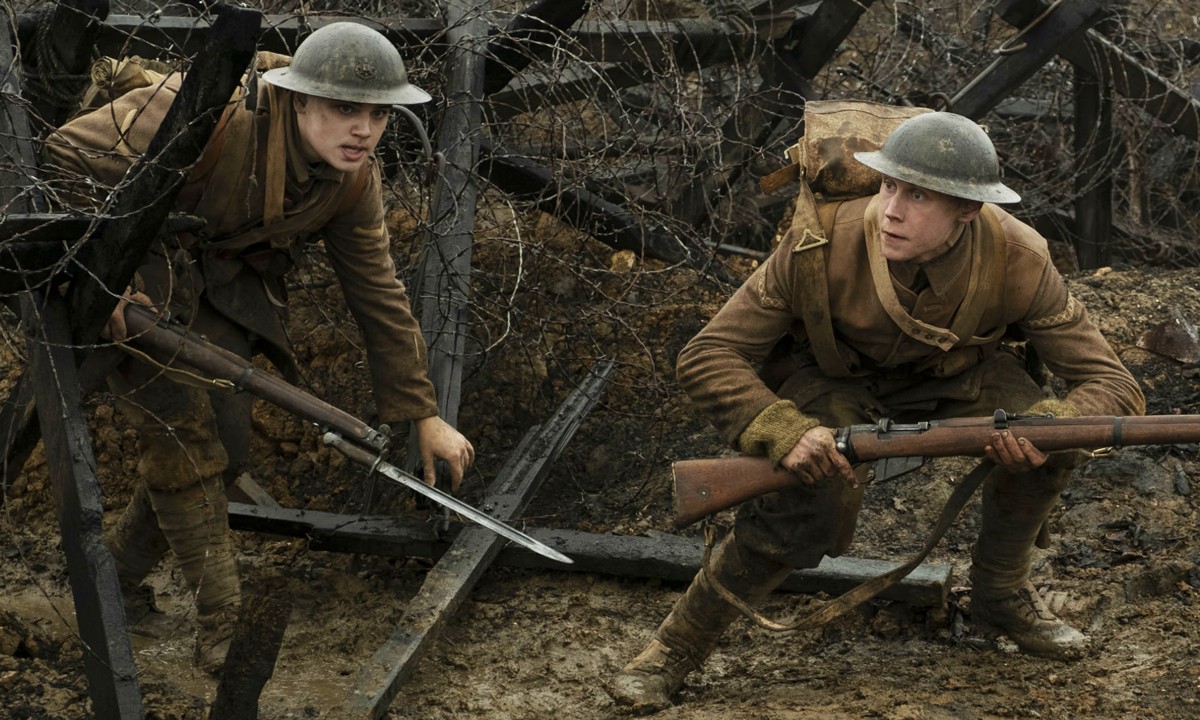 Let’s set the scene then. 1917, in what is likely meant to be eastern France, a couple of men are asleep in a field in their full WW1 kit. They’re awakened and told to go visit the general for some duties, and an alarmingly short walk later they’re out of the pristine grassy meadows and into the trenches. Their assignment is to get to another group that’s scheduled to attack tomorrow morning, but they find out it’s a trap. The telegraph wires are cut so they have to send these two directly through the front lines to get there and oh by the way, one guy’s brother is in the group.

This plays out in the first, I don’t know, five to ten minutes. It’s a pretty good setup, isn’t it? Stakes both on the macro scale and the micro scale are clear: the attack will fail, there’s a lot of lives to save. The dangers are also clear, heading through the front lines that they think the Germans have abandoned as a part of their plan but good luck anyway. And there’s the ticking clock above all. It’s a really compelling sort of setup, which makes it somewhat impressive that the film is so bland and tensionless.

The gimmick across the whole thing is that it’s filmed in the single continuous shot style, which in and of itself isn’t a bad thing. Birdman, a few years back, was probably the first huge example of it and it won Best Picture, and was quite good. So we follow these two guys on their little quest, almost nonstop, with an interruption of the flow if time only as one is knocked unconscious. But in this particular example it doesn’t help the pacing or the scene, it’s just sort of a gimmick that wasn’t really needed. In fact, I think it hurts them, although it did just win the Best Cinematography Oscar (and nothing else).

It always feels like its’ rushing from scene to scene, though. It’s pushing too hard to get to a new set where a new bit of the story unfolds, and those stories aren’t themselves bad or anything. It just begins to feel bizarre. For those of you that have ever played an indie walking simulator game based in the Source engine, you’ll probably know what I mean. There are bits of walking between the scenes where it tries to hide that its advancing time, but then it stands still while you’re at the next oooh-aaah set piece it wants you to stare at.

But the thing is, having that sort of eerie pacing tone isn’t necessarily bad. It works out well and is an important part of some of those walking sims in a great way. It fails desperately in this case, however, because it tampers with your ability to feel the urgency of it all. Those games are meant to be a strange but relaxing experience, mostly. This is a sort of war film, with hard stakes and the ever-present threat of death not only for the heroes, but for thousands of their fellow soldiers. Your ability to feel the tension over that is completely dismantled.

It should be telling how much this one stylistic choice is the focus of what I’m talking about here. Everything else is fine. The acting is pretty good (Andrew Scott appears early on as a fatalistic officer and puts on a simultaneously horrifying and hilarious performance for a great scene, but everyone else is just slightly above par). The sets and props and all are fine. Sound is good, blah blah blah it’s all just fine, and is all disrupted by the long shot thing.

That’s not to say I think it would be a great movie if they’d changed that, just that it would have been markedly less distracting in its portrayal. It could have been better and might even have been pretty good. Just not, you know, amazing. It’s weird that I harp on a movie for the cinematography and call the writing fine. Dunkirk might have been another example of this, but that one used its strange time cuts to ramp up tension instead, and to make the assorted tense scenes interconnect in strange but effective ways.

It was up for Best Picture as most of the World War films tend to be these days. It didn’t win, which wasn’t a surprise.