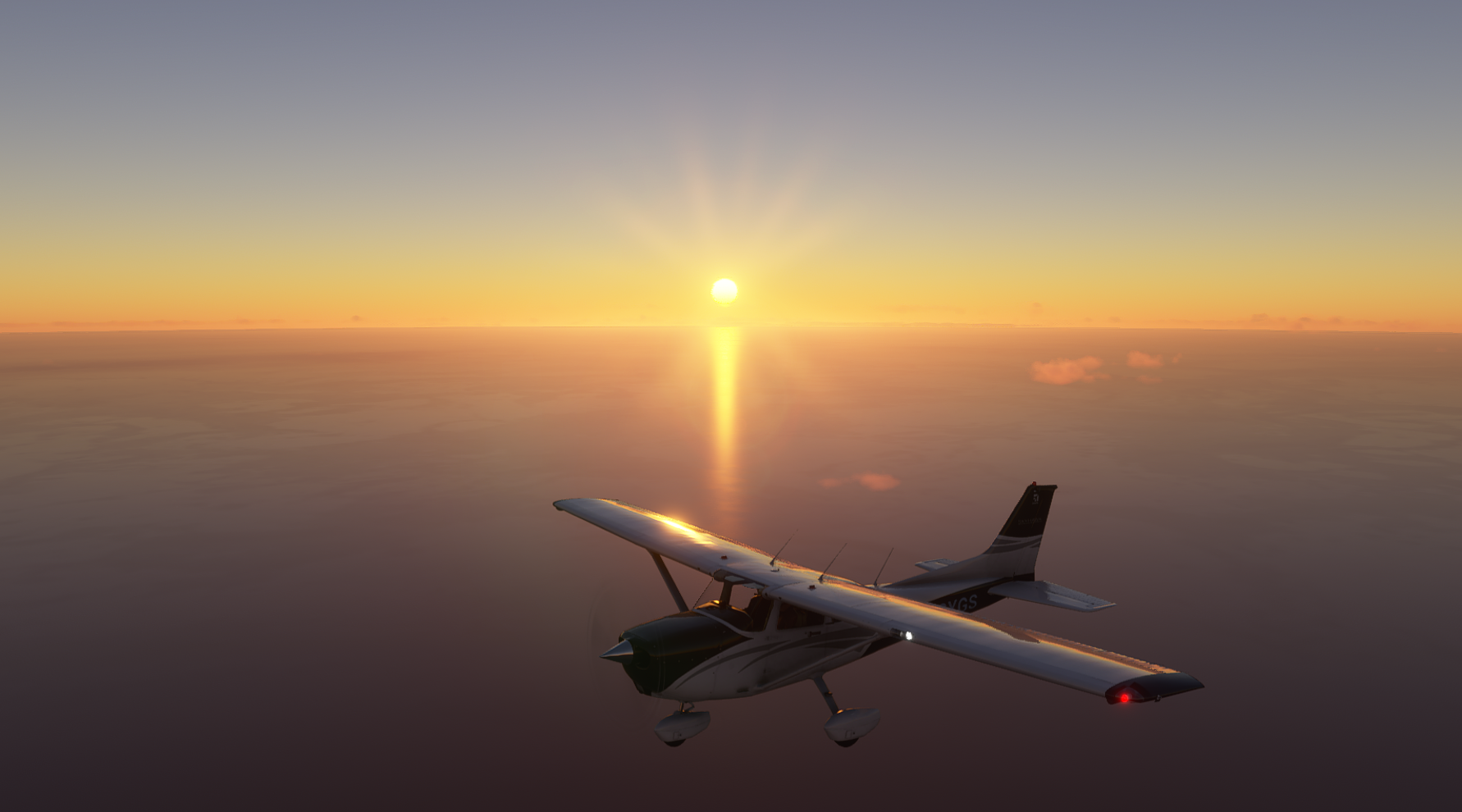 The new Microsoft Flight Simulator dropped about a month ago. It should probably be no surprise to anyone near me that I’m hooked.

There are a great many roads I could go down in discussing its importance to me. There’s the bit about having flown with my uncle when I was a kid which impressed a fascination with aircraft I’ve never shaken. I could say it’s an amazing escape in these days of the ‘rona. I could just say it’s a fantastic way to explore the world from your desk. All of these are important. Who cares. Let’s review it.

First and foremost, and above all else in every real way, it is gorgeous. It is astonishingly pretty. I had to choose among a dozen screenshots to go with the photo and after having settled on one I realized the game had gotten even more pretty in the flight I’m doing in the background, and had to take another screenshot and post it instead. As I type the sun is a little lower over my Cessna in the Caribbean right now, and even prettier, and I’m resisting the urge to get yet another screenshot.

Indulge me as I continue to gush over this for a moment. The lighting is fantastic in spite of the fact that I’m now three generations of video card behind and don’t have the amazing powers of RTX yet (rectified soon, I assure you). The clouds? They’re not in that photo but they’re… I lack the descriptor. Next level? Next fucking level clouds. Imperfect but unlike anything else I’ve seen, and floating over the top of them or through them is serene and intense and amazing. And the aircraft modeling is so good that you might be able to see in that screenshot that they even got down to the level of showing the slight imperfections in the wing surface. And look at the mottling of the water. There are imperfections I’ll get to later but for the moment it’s just so much to take in. Sort of breathtakingly precise, if still imperfect.

Add that to the new surface mapping they’ve done. There are problems here too but you can hit up YouTube and find side by side examples of landings between the game and real life, and although yes, you can tell them apart, it’s creepy how close they are. In a good way. Here’s one example landing at Orlando.

The audio is fine I guess, nothing to complain about other than that I wished they’d use different robot voices for ATC. I believe that’s being worked on.

The flying itself is pretty good, minus a laundry list of bugs. That’s really quite expected for a launch this big and so early on, and it’s good to see that they’re being worked aggressively. But some of them are really massively aggravating. But it’s also sort of expected. It doesn’t feel like it’s changed much, but perhaps I’m wrong there.

Ok, on to some problems. Most of these come in the forms of bugs or not-yet-implemented features and frustrations.

There are no liveries yet, although you can add your own. Those of us that played FSX will remember the made up airlines you could fly as: Orbit, World Travel, and another I forget. Not even those are in. If you fly a Boeing 787, you’re flying it in a Boeing skin. Boring.

Several planes have Autopilot problems, notably the 787 and the 747-8. The 787 can’t autothrottle, and the 747 is constantly porpoising at altitude. I thought at first that the latter was a bad weight balance problem I had and tried resetting without using the stabilizer fuel tank in the rear. Turned out that not only did that not help, that fuel tank doesn’t work in the game at all. Nice.

Several planes also have missing or not-working instrument panels. The 787 (this one keeps on coming up in my gripe list and seems to be the most incomplete) has a pad to your left hand side that offers zero information at all. Much, much worse is that while you can set your transponder frequency you’re unable to actually turn broadcasting on: you have to have your AI copilot do it for you. But you can see the switch that you would turn from STBY to ON. It just pretends that switch is inoperable.

The two business jets, both variants of the Cessna Citation, have fuel usage problems. I was set up on one flight to try to fly from Chicago to Mexico City, a flight that should have been no problem. After taking off it turned out I’d used half my fuel by the time I was over Memphis.

Oh, and the game has built-in checklists for flying. This is a great idea, but they’re only complete on one or two planes. Something like the 787 will get your engines started and nothing else, but several of them are guilty of this.

Let’s get away from the 787 for a minute. The global terrain was generated by some sort of AI tool based on satellite photography. I really, really love this and it’s definitely produced some amazing results. It’s also produced ridiculous and bad results: Buckingham Palace in London was remade as an office block. So was le Stade de France, a football stadium in Paris. The stadium where Paris St. Germain plays is just a flat circle on the ground. Basically, if said AI couldn’t recognize the building somehow, it just made it an office block or made it flat. Worse, as I was flying one of the missions the game offers I spotted a strange plane-shaped spot in the terrain. Apparently the satellite photos had seen an aircraft, and the AI decided it was a part of a nearby mountain and modeled it as such. On top of that the photography was a bit dated: Atlanta still has the Georgia Dome, but the spot where Mercedes-Benz Stadium would reside is still a cleared field.

This method was also used for most of the airports at which you can take off or land, but to mixed results. Some areas have taxi lights in weird positions or airway markings that are set oddly. Aggravatingly this is also the case at some of the ‘premium’ airports it offered, such as at O’Hare: one of the taxiways in particular has the markings reversed so it looks like you’re not rolling on the correct side of the lane. You’d think that those, at least, would have had issued corrected.

And skipping away from the other stuff for a moment, it’s missing some aircraft it should probably have. No 737? No Bombardier? That’s a bit of a surprise. But then, other aircraft (and airport scenery) are already being added to the in-game market to add to your account and get flying. For Microsoft this is a smart move, they can outsource some of the development work to outside teams. This market is already starting to populate itself.

But I’m getting mired down in complaints. There are a lot of other gripes in which I could engage, but the fact is that the game is still amazing in its way, and it’s still immediately the absolute top tier standard for general aviation flight sims. I’ve racked up over 100 hours of flight time already and enjoyed most of it, but fixes are already rolling out for the problems I’ve mentioned here. The next big patch is supposed to take care of several of these. The overall point to make is that sure it’s imperfect… but it’s just so pretty. It’s so well done. Everything else feels like nitty-gritty complaints.