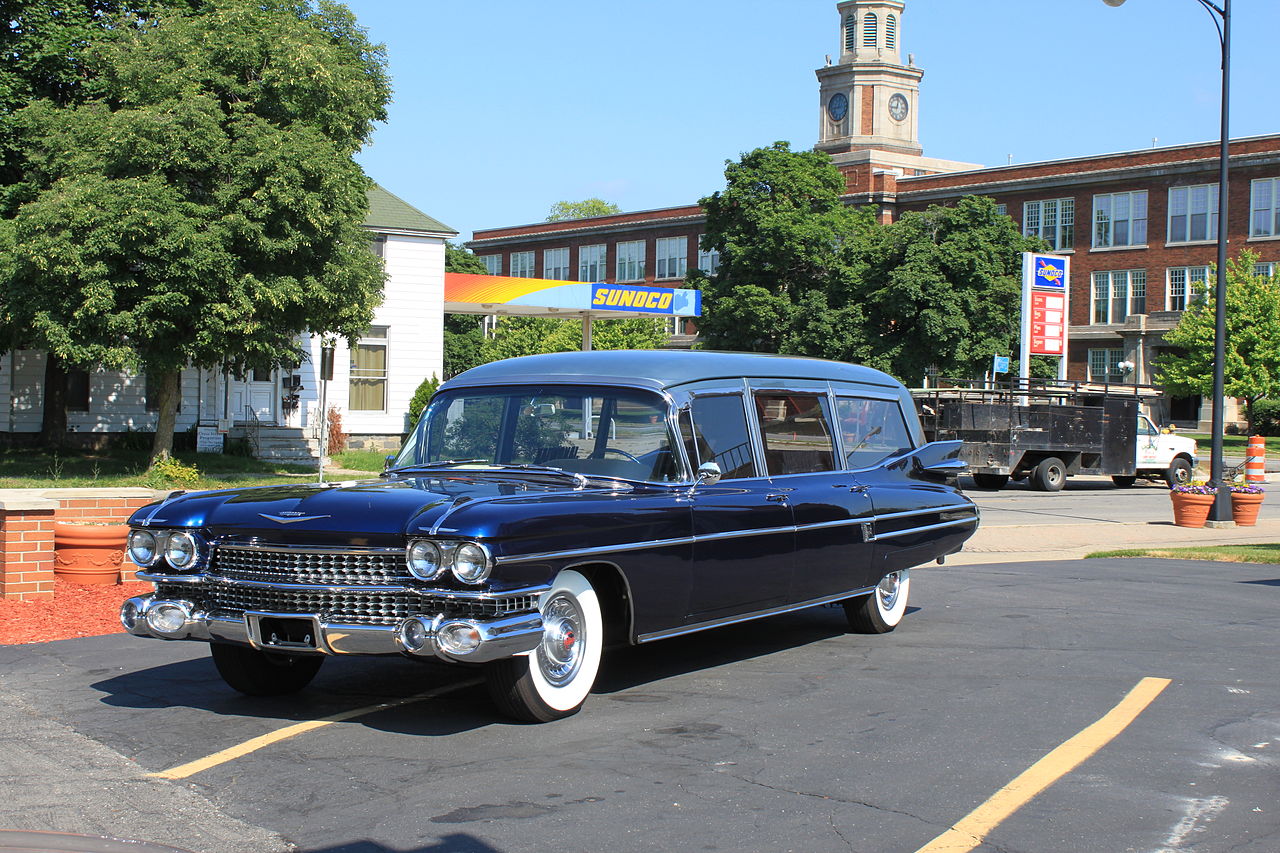 Having just wrapped up a funeral for my uncle, which was unique and strange in its own ways, it occurred to me that the past couple of funerals I’ve sat through had been rather funny.

I say this without meaning to sound mean to those who were/are grieving. I get that it’s an important part of the healing process following a death. But having processed all of that for myself I have the opportunity to view it all from an entirely different perspective: the eternal smartassery with which my family is imbued. And it’s interesting to note that funerals can be very, very funny. Ergo I shall relate the tale of one of my grandmothers’ deaths and memorial. Which, unfortunately, requires that I begin with some of the sadder backstory.

My uncle (the now-deceased one) had discovered grandma unresponsive at her home, and got her to the hospital. Without getting into details, it was determined that she’d had a stroke or similar episode, and one of the effects of this is that she couldn’t remember the past 25 years, give or take a few. She had forgotten that grandpa and two of her sons had died. She was shocked to see that my father’s hair had gone so white. She couldn’t remember my wife Erin who had taken to visiting her regularly (though when Erin left something did click and she asked when they’d next do lunch). All of this is rather sad to ponder. Following some physical therapy, another stroke or whatever, and a brief stint in hospice, she died. The whole ordeal was about six weeks long, and given that it was no shock that she was in poor health, I think most of us came to terms with it rather quickly. We grieved at her ill health, and later, grieved while she was in hospice. It was a kindness for her and for all of us when she passed.

Ok, that’s the sad bit over with.

Like grandpa before her, she hadn’t wanted a big fuss. That was fine with us. We arranged a memorial service at their church, keeping it all quite low-key, just a few days after her death. My family and I showed up on the day, gathered around in the lobby, generally making small talk. At one point I excused myself from our group to go sign the guest registry. Standing next to it was a smaller, older woman that I didn’t recognize. She asked with a catch in her voice if I was one of the grandsons, and I said yes.

She responded to this by breaking down into tears and babbling about how dear my grandmother was, how she wished she could have done more for the service, how she was kindest old lady etc., all the while weeping uncontrollably until I was comforting her over the grief of my grandmother’s death. To be honest, I hadn’t been prepared for that.

But after finding the right moment I escaped back to my family, and we stood near the doors while other people filed in. Not everyone was especially well-dressed (and frankly I wouldn’t have been if I hadn’t been expected to be in my suit), but on this particular Tuesday, one guy stood out. He was quite fat, and rolled up in a golf cart, came in through the main entrance in sandals and a polo shirt. Now, the church has loads of volunteers who come in to help with cleaning, general maintenance, whatever. I assumed this guy was part of that group and that he hadn’t realized something was going on so he didn’t think to maybe use the side door and be discreet. He wandered off down a side hall.

After a bit we did the procession, the family walked up the aisle to sit in the front rows with the “Reserved” tags on them. Elsewhere in the church were much of my mother’s side of the family: both grandparents, an aunt and uncle, some cousins. But for the most part I knew none of those present. The deacons and some of the other assistants (I’m sure there’s some Catholic term for them, but I can’t keep up with all that stuff) busied themselves arranging the altar and so on. Normal stuff.

And then the priest rolled in: he was a fat man in the normal white robes… but since he was standing up on the podium, I was able to spot that he was (still) wearing sandals. He needed a pedicure. This prompted a quick check of the other feet on stage: there were two more sets of sandals, and one wearing what looked very much like combat boots. Under their robes. But we will refer to the priest as Father Dick.

Some songs were sung, homilies were read. Father Dick wandered around swinging a censer that filled the air with some rather nasty incense… and he did this immediately in front of my father who, having been a smoker for something like 40 years now, began suffering coughing fits. But after a few readings the show was well and truly on the road.

Father Dick did the eulogizing and man was he winging it. The majority of said eulogy focused on my grandfather’s service to the church, and my grandmother’s tolerance thereof. Standing out among the amusing lines were his claims that she “never complained!” Which is patent bullshit: if one were to make a list of personality traits of my grandmother, “serial complainer” would have been in the top three. The kicker of all of this, though, referenced a hospital meeting some of the family had apparently not been aware of. At some point one of the hospital’s social workers met with grandma to try to assess whether she was safe to return home. Father Dick had apparently been present for this meeting (or he’d invented it whole cloth, we may never know).

The social worker, when asking questions, noted that grandma continued to refer to wanting to go home to grandpa, insisting that she wouldn’t be alone at home. And remember, grandpa had died in 2013. The social worker was concerned about this, but up at the pulpit, Father Dick said with a fat smug face “Ah, but I knew she wasn’t losing her mind: she knew that Carl (grandpa) would be right there with her”, and “When she said it was time to go home, she meant God was calling her” etc.

Fuck sake man. Don’t try to twist my grandmother’s stroke and possible dementia into your ridiculous sermon. Sorry, that’s not so much the funny bit.

In the middle of all this, something else went on. My other grandfather, in the audience, has had this eternal difficulty with his wristwatch. You see, he can’t get a handle on how the alarm is set, and he keeps turning it on no matter how many times we turn it off for him. And on top of that, he’s a bit deaf and doesn’t seem to notice this. At noon precisely, a watch started beeping. BEEPBEEP BEEPBEEP BEEPBEEP BEEPBEEP BEEPBEEP BEEPBEEP. Father Dick, to his credit, didn’t stop with the prayers he was reading at the time, but a few folks stirred. I slowly and casually glanced back over my shoulder towards where the rest of the family was. My cousin, standing next to grandpa, caught my eye, slowly nodded, and rolled his eyes. We’re lucky the thing shuts itself off after only a full minute of that. And the service rolled on.

One of the deacons, however, had indeed spent a lot of time with my grandparents and gave a much better speech on the matter shortly thereafter. But we drove from there to the graveside service*, said the last few words. EDIT– Erin just reminded me of another detail: as we drove away, she noticed that the cross atop the church had a vulture sitting on it. Awesome.

The deacon I’d noted before that seemed to be in combat boots was the one out there, and I guess he’d just been prepared for the muddier ground. This was in comparison to my wife who’d chosen to wear high heels, thereby accidentally aerating the lawn. We went from there back to the church for a potluck, thereby ruining my otherwise-successful diet (it never recovered), and that seemed that.

Aside from two things, which are again to the sad / only funny in retrospect style.

First was that two days later, my other grandma collapsed at home. She was rushed to the hospital and the ICU, then to hospice the next day… into the same room at the same hospice as the previous grandma. In the end I lost both a mere twelve days apart. Her funeral was less silly mostly because, while things did go wrong, everyone had a great deal more humor about it and we rode it out without some of the ridiculous pomp and circumstance.

Second was that on that Friday… the same day that Grandma 2 went into hospice… Farther Dick didn’t show up for mass. They checked his house and found that he’d died of a heart attack.

These two followup items may simply be coincidence… but I can’t help but wonder if one of them might have been grandma reaching out from the beyond to correct someone on a shitty eulogy. One last complaint, as it were.

But there, that’s one of the stories. Amid the sadness… and, frankly, surreality… of the funeral, it can just be plain funny. I have to admit I’m struggling to even decide how to begin telling the tale of the most recent one, but it’s quite a lot better.

* Ok, funeral processions. I have difficulty driving in these, mostly because when driving so slowly the desire to pass people is now instinctual. Failing that, it has the feeling of a caution lap in a race and I want to weave back and forth to clean my tires. But there’s also the maddening desire to crank up the bass as we cruise along, which I definitely gave in to. At least it wasn’t “Another One Bites The Dust”… this time.