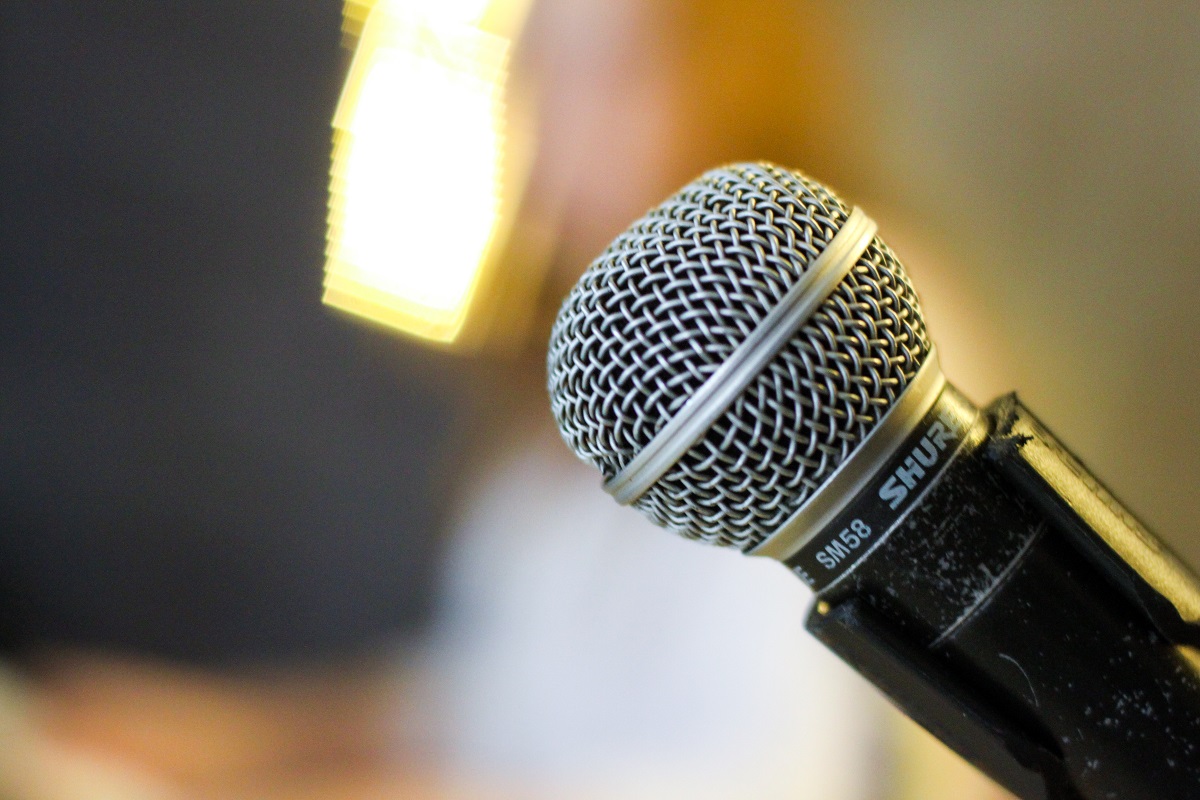 A couple of weeks ago while out with friends, one asked me whether I’d ever considered doing a podcast.

This one caught me by surprise, because no, I hadn’t. Or rather, I hadn’t done my own: I’d connected in to those of a few friends and participated. But I’d never thought about bothering to do my own. Podcasts, in general, aren’t my thing. I rarely sit still long enough to want to really listen to them, and in the car I prefer heavy, dark music to go along with the generally dystopian theme that matches the disastrous state of Atlanta’s traffic.

He asked this because I’ve done a bit of voice work in a few capacities, some of which he’s heard. Back in the DragonCon days I recorded a few fake radio DJ pieces that became somewhat legendary with our circle of friends, for instance. During a work thing I had cause to re-record an existing voiceover for a presentation, which in turn led to me being asked on a couple of occasions to do voiceovers for some training material they were putting out. Most of the HR departments in my company have heard me work.

So one, I have a certain, small amount of cred in the “talking into a microphone” department. Two, in the act of doing all of this I got to researching general recording info and audio editing work. I’m certainly not pro-level at either of these, but basics are somewhat easy and even a bit fun. But… would I really want to do a podcast? Sitting there talking to myself for 20 minutes or so? And even if so, about what?

Almost immediately after that question, though, another friend recommended a podcast she’d been listening to called Lore. Lore is an interesting podcast featuring details about certain local folklores and myths. I’ve been spending the week listening and find it pretty interesting… plus, the often-sinister tone of some of the events being described also happen to go along with my commute.

From there I’ve branched out to a few others. As a ham radio guy (still not done a hell of a lot with it) I’m a member of the ARRL, and have tried listening to a couple of the shows they put out. This has been both informational and somewhat amusing: for being radio people, a lot of them do a terrible job with the audio aspect. Plus, some of the newbie-focused casts that were released seem to attract the sharply southern-accented voices of folks that simultaneously clearly can’t edit audio for shit. Which is both funny and cringeworthy.

Regardless, all of this got me back to considering whether I’d want to do any of my own damn podcast. And I’ve changed my mind: I guess I would want to, or I would be open to it. But only if I could find something worth the time to set it up and publish it. And I can’t think of what that would be.

One of the ideas that came to mind was to resurrect one of those fake radio DJs: the much beloved (and much missed) Mephistopheles in the Morning. If you were stuck in hell, obviously you’d be forced to listen to a lame, annoying drive-time radio host. And so Meph hosted your DAMNED ETERNAL MORNING RUSH HOUR on WHELL. I had a hell of a lot of fun with him, even as relatively little as I did. But at the same time, what’s a DJ without music? And I relied on music a lot for that. I mean, the whole reason I created Meph was to host the music for that party we hosted, to give it more context than just “well here’s a room themed about Hell, now here’s some devil music to go with”. I don’t know that he’d be ready for talk radio, being an obnoxious dipshit in between spots with guests… and what guests, besides?

And beyond that, I have no idea what sort of topic I’d go with. Tech?  Eh. Games? Maybe, the idea of doing reviews of older stuff and trying to put it into a greater context of their respective eras and what it meant to gaming might be interesting. Cars? Nah. Work bullshit? Sooner or later I’d get identified for that, so, no.

But then, there’s another old idea. One that I remembered a couple of days ago, too: my old Evil Consultancy business idea. There are hundreds of movies, TV shows, books, and so on, where some writer tried to put together a story that just did a shitty job with their villain. A while ago I wrote up a lengthy piece on all of the assorted mistakes Maleficent made in Disney’s animated Sleeping Beauty, for instance. Her motivations were poor, her “revenge” was weak, and she left open far too many possibilities, and obvious ones at that, for her own thwarting. There’s a space in that realm for a consultant to offer advice.

Plus it leaves a lot of opportunity for idiot fans to whine back at me. “Noooo, it wasn’t like that!” But it was, my friend. Your fandom is built on lies.

I don’t know. That’s the front runner right now, but it would take some thought to assemble into a more workable, sustainable format. And also there’s all the effort, which I don’t know that I really care to undertake. At the same time, I was also complaining to a friend not long ago that I needed a new creative outlet.

So we’ll see. It’s on the back burner right now. A little writing and a test recording might be in order, and then I’d need to get a website and decide on a name and probably try to throw up some sort of logo and blah blah now I’m not interested again.