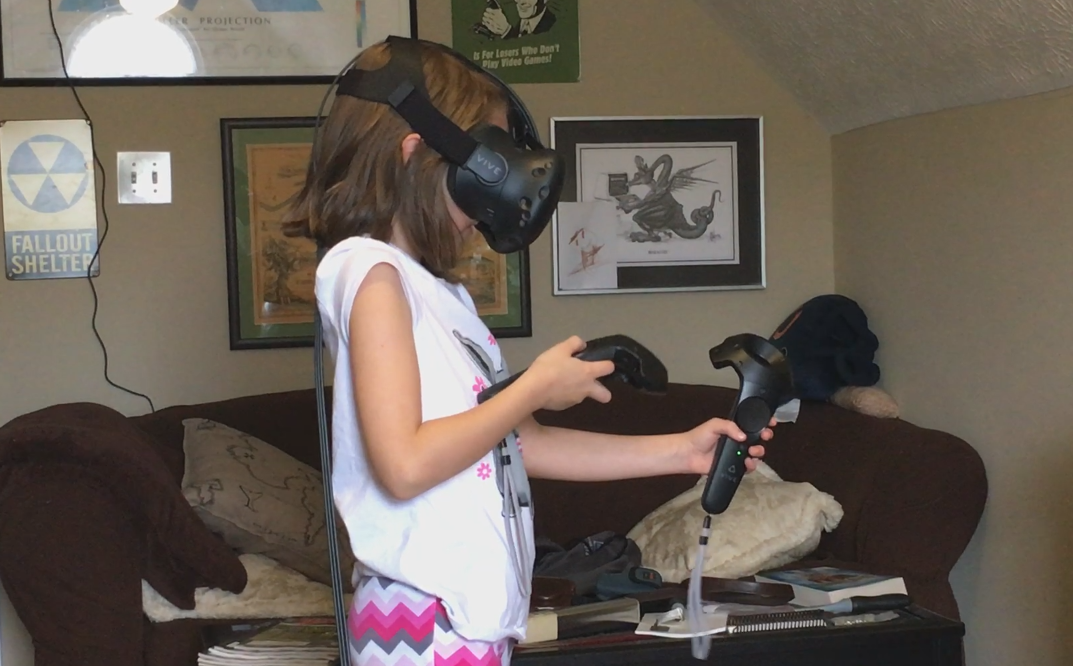 Once I manage to get Minecraft working for our HTC Vive, there’s a good chance I’ll never see my kid in the real world again. Even more likely if they ever make a VR-enabled Pokemon game.

The Vive arrived last Thursday amidst a flurry of other life issues in progress, as well as work. Once the dust settled and I had some time to set it up, the install wasn’t too bad. The worst was installing the two Lighthouses, little boxes that help pinpoint for the system where you are in the room. They kindly sent them along with drywall anchors, which were shit. After losing one in the wall I switched to my preferred screw anchors to finish the job. Woo.

The software setup wasn’t anywhere near as lengthy as I’ve seen others complain about. Once the system is up you have to trace the outline of your play area, which took a couple of tries as it thought I was making it too small, but then bam, off we went. The initial tutorial was just as good a VR experience as any of the games so far, and took very little to ramp up on the basics.

Over the weekend we racked up a total of about 12 hours of VR time across the three of us. Of this, Job Simulator has taken up 5 hours. It’s the easiest way to get in and start virtually throwing crap at robots who act annoyed at you for this, and therefore seems to be the biggest draw. Tilt Brush, the 3d sculpting program, comes in second. The others we’ll spend more time in as we can.

But on to some high and low points. The good is that it’s all really well done. The Steam overlay in-VR is a comforting thing to be honest: I’m used to it, I know when I see those logos that it’s a familiar experience. And in spite of having a different general layout, it was all instantly recognizable. The games are great, mostly. I guess I should get into each of those individually later on. Actually in retrospect, the biggest problems have been specific to certain games… hm.

Of those I’ve played, the two that gave me issues were my beloved Elite: Dangerous (a space sim), and DCS World (a combat flight sim). Elite handled the motion tracking very, very well, and having the VR effect really made the game awesome. It gave it a huge sense of scale, even more impressive than it already was on a flat monitor. But some of the UI elements come too close to your face and make them look very, very pixelated and grainy. I had a lot of difficulty reading text at all. DCS World had fantastic graphics and most of the text was ok (albeit tiny), but the motion tracking was problematic. When moving one’s head too quickly it would stutter on the framerate a bit, which was an instantly-nauseating effect. I need to experiment with the latter to see if I can turn down the graphics settings more and alleviate that. But I also note that neither of those two games were designed from the ground up with a VR focus: I’ve played each for years and they added VR support in after launch. That may relate to it.

Those that were VR only were universally well done. Space Pirate Trainer added some excellent, frenetic, silly action to it all. Valve’s very well done series of minigames called The Lab also added a lot of fun, and all of it was up to Valve’s stellar quality. And as mentioned previously, Job Simulator is the current star of the household.

Otherwise I just have some general notes I feel the need to list.

Well that’s good enough for now as I have to get to a meeting. But this has been a lot of fun already and once more developers are building games for it, things are going to get even more fun.