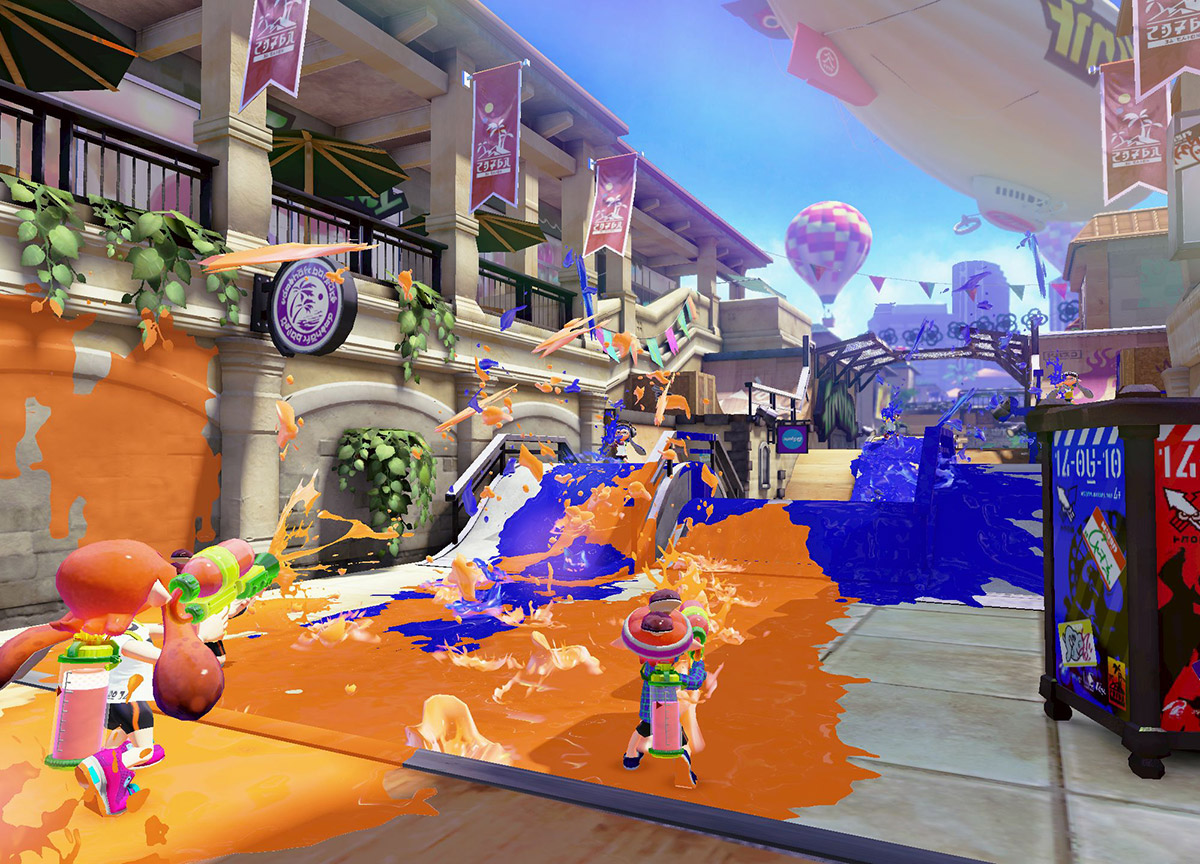 Ok, stay with me on this one. You start in a gang of 4, and you rush out onto assorted urban landscapes to cover as much turf as possible in your gang’s colors. Occasionally along the way you gun down your opponents, make your way into their territory, and start covering their tags with your own graffiti.

All of that sounds like any old multiplayer shooter game, but here’s where we take a turn. You’re playing as a squid creature that can turn into a humanoid, vaguely pre-teen in age, that runs around with water guns, water balloons, huge paint rollers, and pressure washers. They spray ink of your teams color, and you’re literally covering it in your color: at the end of the map, the overhead view pops up and whichever color is most represented, wins. Shooting one of your opponents with ink will “splat” them, causing them to have to respawn at their base. And of course, during all of this, you can turn into a squid and swim around in your ink, stealthily, for sneak attacks or rapid movement.

Therein we have the basics of Splatoon, Nintendo’s new big thing. This was announced at E3 last year and has finally launched, a kid-friendly edition of Counter Strike. And it doesn’t stop with the combat: you can drop back to the main city of the game (“Inkopolis”) to buy new outfits, guns, etc., all of which change your performance or the gameplay in one way or another. Add in some extra mechanics… maps change every 2 hours, announced by the pop-star news duo The Squid Sisters, with special events like Splatfest, etc., and it’s shaping up to be quite the powerhouse. Nintendo is angling to make this bigger than Zelda.

And it’s working. Kids love it. Adults are loving it, when they’re not complaining that it needs voice chat (which would ruin the game and the kid-friendliness thereof, so shut up). Copies of the game are selling like mad, the servers are at times buckling under the strain of all the interest, though they’ve been stabilized. It launched on Friday, and our preorder copy arrived to let Zoe put in a hell of a lot of time on it. She loves it. I love it. I love watching her love it.

No seriously, it’s immensely entertaining to see my kid playing this one. Even though this sort of game has never been her thing before, she’s showing some flashes of real skill for it. I got to witness her first double kill, followed later by her first triple kill (so proud).

Couple of downsides to it, though. It could be argued that it’s not worth the $60 it costs right now (kind of agree), but there’s a lot more on the way. I hear plenty of people complain about the two rotating maps at a time thing, and it’s annoying when two bad maps are in together (hate the warehouse and the oil rig, love the skate park and the mall). But the biggest annoyance is that you can only really play with the WiiU Gamepad, not the nice fancy Pro controller that should be able to handle it, yet feel much more comfortable to use. Super annoyed at that. That should be something they can patch in, but we’ll see. They’ve gotten plenty of feedback on that I’m sure.

Right now, this game is a killer app for the WiiU, and there’s more expected to get added to it. Maps already regularly rotate but that gives them the chance to add more in behind the scenes, which is expected before long. There’s already one more game mode they’ve announced but haven’t gotten in place yet. And I’m particularly looking forward to the first Splatfest on June 20th, which should be really entertaining.

If you’ve got the WiiU already, I hugely recommend it. If you have kids, I recommend it even more.