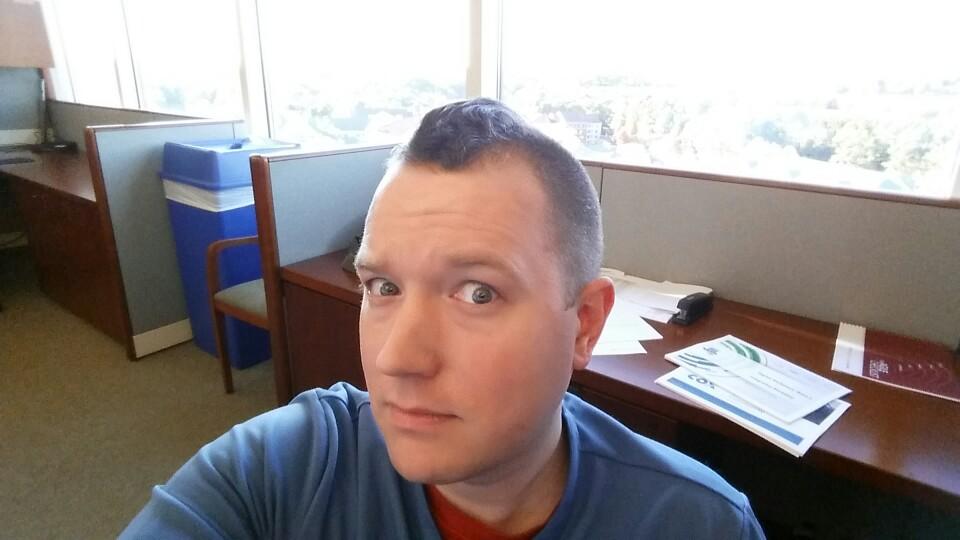 By now most of the people who see me on a frequent basis have gotten used to the look. There are always one or two straggers – one coworker passed me on the way back from lunch yesterday and had to do a double take as I smiled and kept going – but for the most part the shocked commentary has died down. Though I still do get people asking when I’m going to color it green and see if I can get some height out of it.

More surprisingly I still have people around the office saying it’s a good look for me and suggesting I keep it. That’s really not on the table, though. It’s fun and all but I’m already looking forward to cutting it off. The crew cut sides of it are still my old, preferred style of hair and I look forward to going back to it when I can, even if I’ll just grow it out again afterwards.

Today I’m sporting the Business Mohawk again (not pictured though, I’ll get a better shot of it for next week). Having the crap in my hair is a strong, crunchy reminder of just why I gave up on having “a style” in the first place beyond buzzing it all off. Fucking pain in the ass. And not just a pain in the ass getting it styled in the morning, but in making sure it stays put all day. It’s a long habit to run my fingers through my hair in frustration, and doing so repeatedly… well, messes it up, of course.

But in the meantime the company is still going whole hog on the Movember thing. There are fewer guys participating than I’d expected, though still probably at least half. Some of those may just be guys happy to not shave for a while, others had facial hair and are now just going through the exercise of re-growing it. A couple who started down this path have already caved, too. Some couldn’t even make it the first week. They started putting up posters around campus for it and the huge outline of the hair, glasses, and mustache everywhere give a distinct Big Brother vibe. I suppose I am some sort of rebel in that scheme, however pettily. Movember Revengers or some silly thing.

Outside of work – or I guess more accurately, outside of people who know me – the hair doesn’t grab much attention. I’m just some freak, easily ignored, which works out well for me. Reminds me of high school if I’m honest. I suddenly flash back to my geometry class, overhearing one of the girls referencing me. “That’s Jed… ignore him, he’s morbid.” Works for me. But the hair is going to stand out anyway, a sort of visual tag for people to identify and recognize me. Last weekend when I had to make three trips to Home Depot (it was almost only two but the damn water supply line was 2″ too short!), the same guy in the same plumbing department was probably snickering at me and my creeping toilet repair / replacement needs.