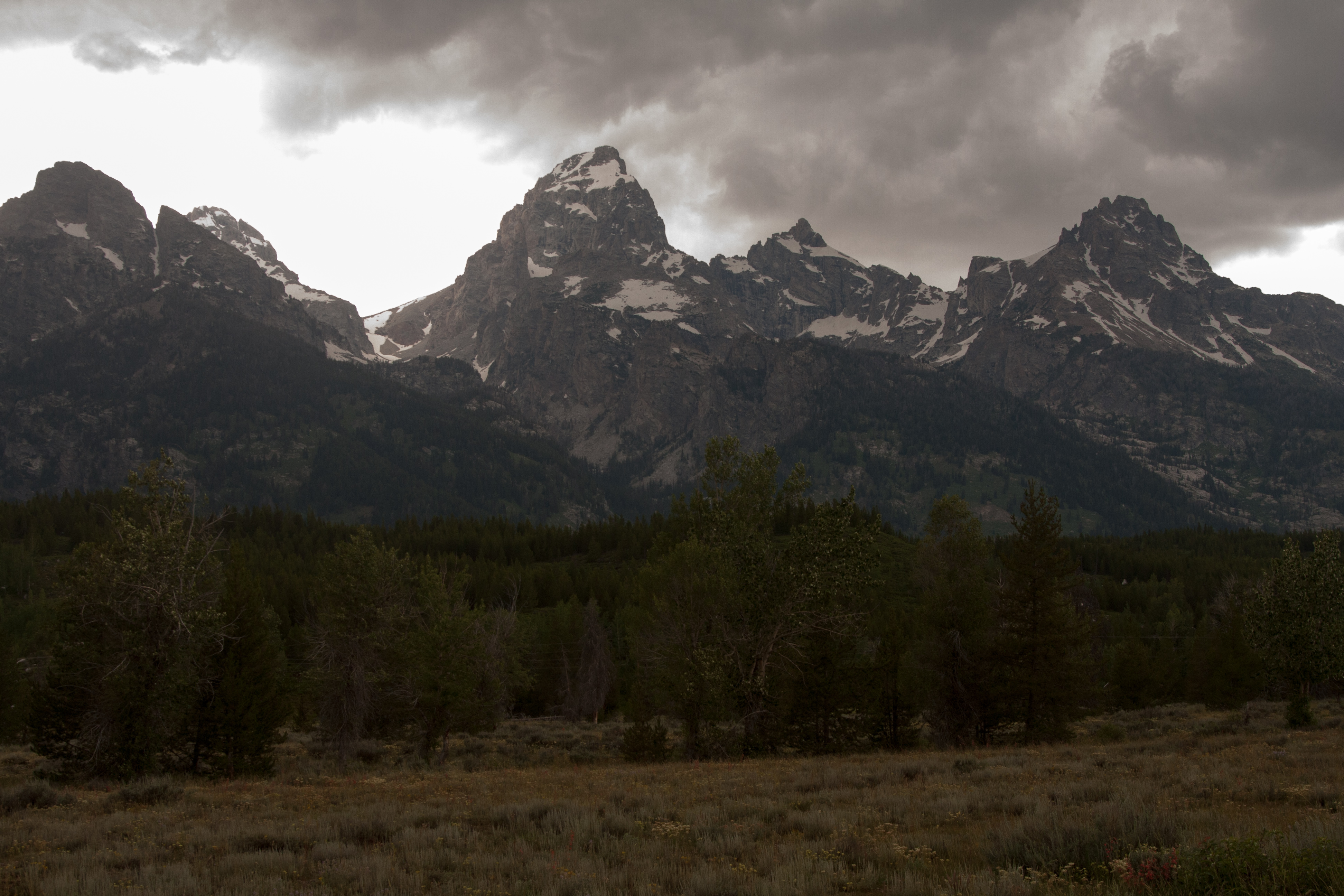 The scheduling, the reservations, the time off had all been planned out. It would take a force of nature and/or Delta screwing up again to stop us. When we hit the sack Thursday night we were packed, checked in at the airport, and ready to go.

This was the plan: we wake up at Oh-Christ-Hundred hours, get to the airport, check a couple bags (was carrying a couple knives… like literally half of Yellowstone’s literature talks about Bear safety so I thought I might as well), get on the plane. On arrival in SLC we rent a car, a nice small car to maximize my fun potential on the drive, and then we cruise north and into Jackson, Wyoming, where we meet Erin’s folks and get into the hotel room. We grab lunch on the drive, dinner with the family, and get to bed for a nice rest.

Guess how much of that went wrong? Driving to the airport became an issue because when I told my beloved Waze to navigate us there it decided I meant the International terminal, so we had to scramble back to the other end of the airport. Security was a problem until I remembered I was now carrying a large metal card in my wallet. The flight was actually fine and our luggage arrived with us, yay. But then came the car rental.

First, we were working with an unnaturally perky and overbearingly friendly agent, Lydia, and having woken up at 4:30am I just wasn’t equipped to deal with that. Second, the car we were assigned was a Hyundai Accent with 1600 miles on it. Now, I’ve always been pretty down on Hyundai, but a lot of friends had been trying to tell me it’s really turned around and is cool these days. It’s not. A more comprehensive review of the car will likely come next. But loaded up, we set off.

We were again relying on Waze to get us to where we were going. Aside from the boringness of most of Idaho, things went well. As we got closer it decided the fastest method would be the scenic route, a mountainous drive through the Targhee National Forest. We didn’t understand this at first: it told us to turn while the sign clearly said JACKSON ahead. But you’ve gotta trust it and in spite of the airport issue, we decided to do so. Man, am I glad we did.

The scenery was epic. The driving would have been truly fun with a decent car (more on that later). The mountainside views showed us what we later discovered were the Tetons in the distance, peeking over the closer, smaller hills. Being stuck behind a minivan that was cooking its brakes was a relatively minor inconvenience.

But when we rolled into town, no family. This was a real problem for us: Erin’s folks had to check in to get us to the room, and we were both exhausted and had nowhere to crash. Turned out, they were still several hours away, having stopped to sightsee at an Olympic wrestler’s childhood home. No, really.

So, exhausted, we drove onwards. We got a few pictures at a tiny wildlife preserve, but then kept moving north. Grand Tetons National Park is just a few miles north of Jackson. In town, you’re in the shadow of some large, green hills that keep it all nestled in a pleasant little valley, some of which contain ski runs. Driving north there’s a point where one of those hills ends, revealing the scene it had been hiding all along, and the sight of it just knocks the breath out of you.

The Grand Teton Range. Holy crap, I’ve never seen anything like it in my life. These are the jagged, snow-capped peaks you see in artwork or pictures from the Alps. They have to be the most beautiful mountains in the US unless there’s some secretive treasures up in Alaska. There was a scramble for cameras and a sequence of clicks and whirrs as shutters crashed, devouring the light bouncing from these beauties. Shortly thereafter we found a turnout where we could stop, get out, and admire them all the more directly.

After a stop at the visitors center (where we promptly joined the Grand Teton Association to support the park) and passing through the gates, we drove on for some time, always gawking at that beautiful range. Above them dark clouds were rolling in: there’d be some heavy rain before long, but in the meantime the contrast was all the more beautiful in an increasingly sinister way.

As we drove on we found we were making a large loop next to a couple of the lakes in the park, and on the return leg we spotted what seemed to be three nearby herds of bison. Fun fact about spotting wildlife in this area: the easiest way to notice them is to spot four or five carloads of tourists parked on the side of the road with a few standing outside of them holding cameras. This was the case here. We got a picture from the car but decided not to add to the traffic jam rapidly forming at the time.

The skies opened up and began chucking down rain so we aimed back towards town thinking of dinner. We pulled into the hotel’s parking lot to get our bearings and decide on a restaurant just as Erin got a call from her folks: not only had they just checked in, but they had pulled out seconds before we got there and spotted our arrival. We followed to the hotel.

At this point, we’d been up since 4:30am and the equivalent time was 11:30pm. We were exhausted. While they decided to go get dinner, and after an unnecessarily long discussion on which family got which room of the suite, we crashed. Hard.