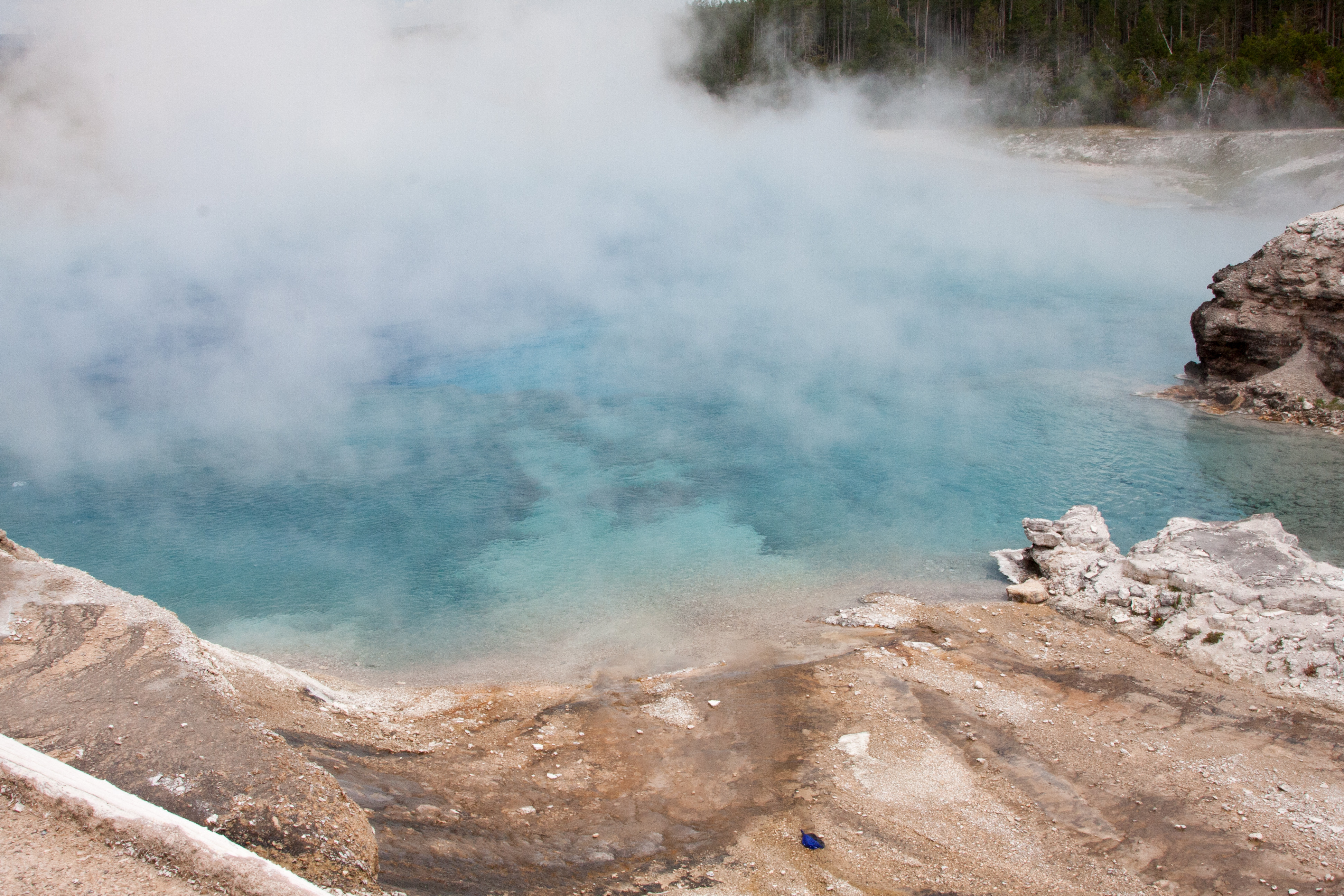 The next morning we were fully rested, and… well no, that’s a lie, we were still exhausted. Regardless the natural wonders of the area weren’t about to appreciate themselves so we had to haul ourselves out of bed, pile into the minivan that the other side of the family had rented, and we blasted through the Tetons to get up to Yellowstone.

Ah, Yellowstone, the most famous of the National Park Service. The jewel of the nation, the honored heritage of our conservation efforts.

Part of the problem with being such a famous destination is that that’s going to attract tourists. I mean, yes, we were tourists too and I’m not saying we weren’t part of the problem. But almost by definition, natural wonders aren’t really meant to accommodate vast swathes of ridiculously-stereotypical Americans and their RV battlewagons. And their screeching children. And their mobility scooters.

Have you ever visited Old Faithful? It is of course the iconic symbol of the whole of Yellowstone, and viewed as a geological treasure it’s properly fascinating. Even with a limited understanding of such things one can’t help but marvel at it. It’s a chance to view one of the more incredible spectacles of nature that the planet can provide. And with that in mind, imagine trying to get the closest parking spot to it. No, really, this is a thing we had to do. How close can we park to this amazing thing, in the HUGE parking lot built just for it, and the nearby gift shops, restaurants, ice cream shops, seating area, visitor’s center, multiple lodge/hotels, and so on. If you actually put forth the effort to step outside yourself and consider all of this it gets properly surreal. Not that the average American tends to do so while they’re busy trying not to spill melting ice cream on the new t-shirt they just bought.

I digress. After we stopped to check out a waterfall, my sister in law announced a quest for all of us: she felt her experience wouldn’t be complete until she saw a moose. I was completely on board with this idea. A moose, a bear, perfect. Deer wouldn’t cut it, we all have loads of those, and the antelope were just small deer. Elk would be cool too. Much of the travel time between spots was spent scanning for these elusive critters. We didn’t see a damned thing, likely because we were sticking to the roads. There wasn’t time for any real hiking.

We did hit up several of the natural springs. Grand Prismatic Spring is another truly majestic sight, its eerie blue, yellow, and orange shades (the orange being vast piles of bacteria which makes be gag considering it) were astonishing. And of course they stank. They stank. More like Stinking Hole National Park, am I right? It’s hard to get away from the odor: if you’re near any of the springs or geysers, it’s omnipresent. A few were worse than others, but none of them were odorless. It wasn’t until after these, and a brief but curtailed hike up the mountain to totally not see some other falls, that we got around to the Old Faithful Experience.

The general heat of the day meant that at this point heat exhaustion was getting the better of me. Unfortunately I’ve always been pretty susceptible to it. We initially arrived at the viewing area just as it was finishing erupting so I got a couple of not-worth-exporting shots. The crowds and the heat became overbearing and I started to get disoriented and confused. We eventually dragged ourselves into the visitors center which was actually even hotter, though the relative calm of watching their model geyser was soothing, and interesting. After a while we decided to go brave the heat and staked our claim in the seating area.

We sat on the provided benches probably 30 yards away from it. We listened to a park ranger talk about how there’s no point in worrying about the supercaldera thing because one, they CAN tell when it’s gonna blow, and two, we couldn’t stop it anyway. This was of note to me because literally every person at the office to whom I mentioned that we’d be visiting Yellowstone immediately commented about how I was gonna die with the volcano. Without fail.

Anyway, as the crowds started to show a couple of us ran for ice cream. The lovely old lady serving us turned out to be from a town nearby and decided it was worth talking for quite a long time, in spite of the line behind us and the imminent countdown to geological ejaculation. Once we got back to our seats the crowd was picking up in a huge way. See this image here? This is HALF of the crowd, ten minutes before the eruption. The other half would be behind the camera. 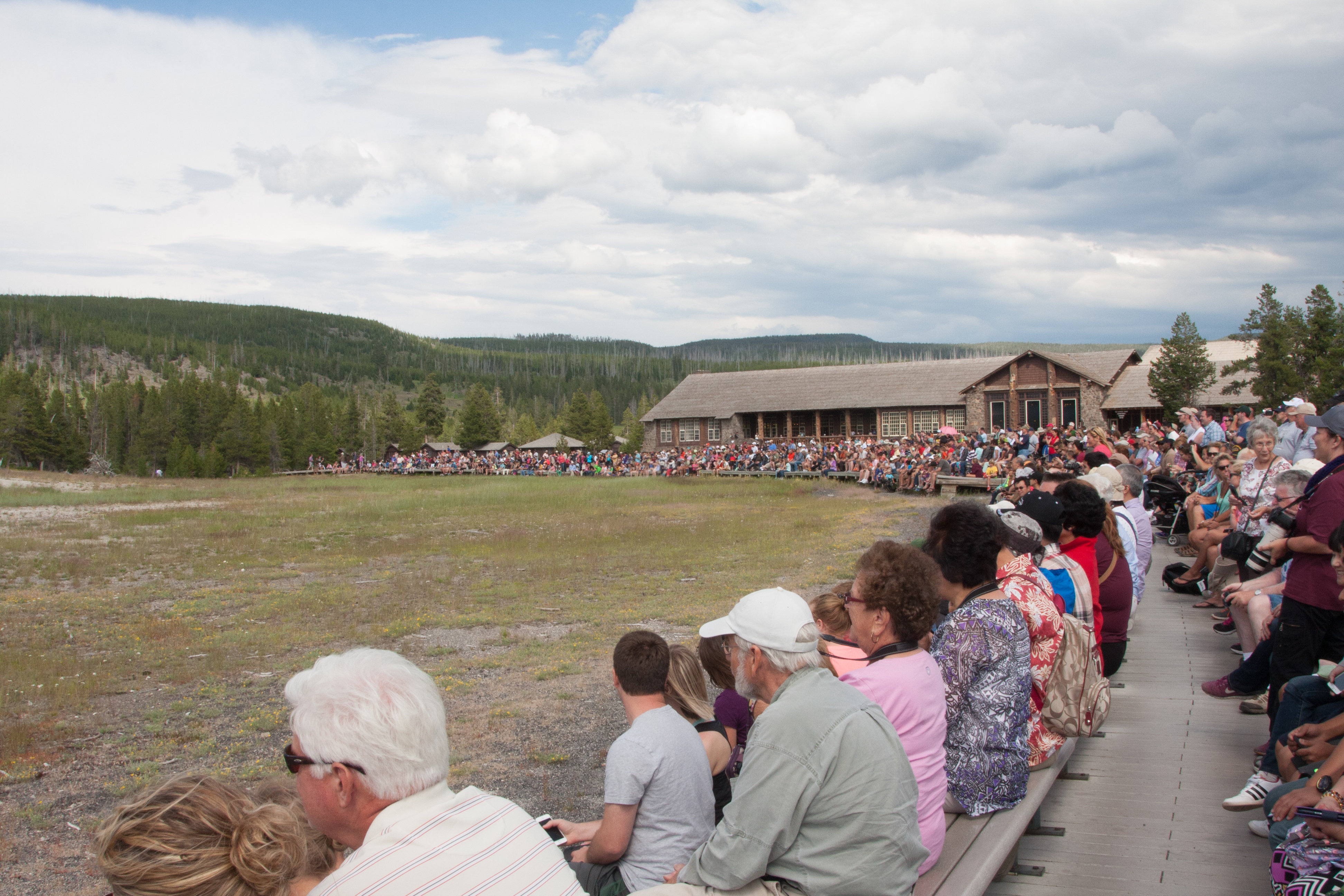 But then the thing blew. You know how everyone tells you how videos of stuff on the internet can just never compare to the real thing? Old Faithful totally does, just minus the smell. Watch it online. It’s better for that alone. You don’t need to go and see it: there’s nothing else to see aside from decent ice cream and lousy parking.

Afterwards we checked out the lodge, a 100-year-old hotel that had been built there, and most of us sat around while gift shop scrounging occurred. And with little left to do and certainly no energy with which to do it, we piled back into our van and hit the road home.

The hunt for a moose continued, fruitlessly. There was tremendous excitement at one point when we spotted the parked tourists sitting at the side of the road staring at something. On further examination it proved merely to be a fox, of which we have several in our yard at home. We also crossed paths with the same old group of bison as the day before. Dinner was had at the only place we could find that wasn’t jam-fucking-packed with people: a Pizza Hut who had their internal temperature set to about 55 degrees. I absolutely loved the cold and felt perfectly normal therein. Everyone else complained.