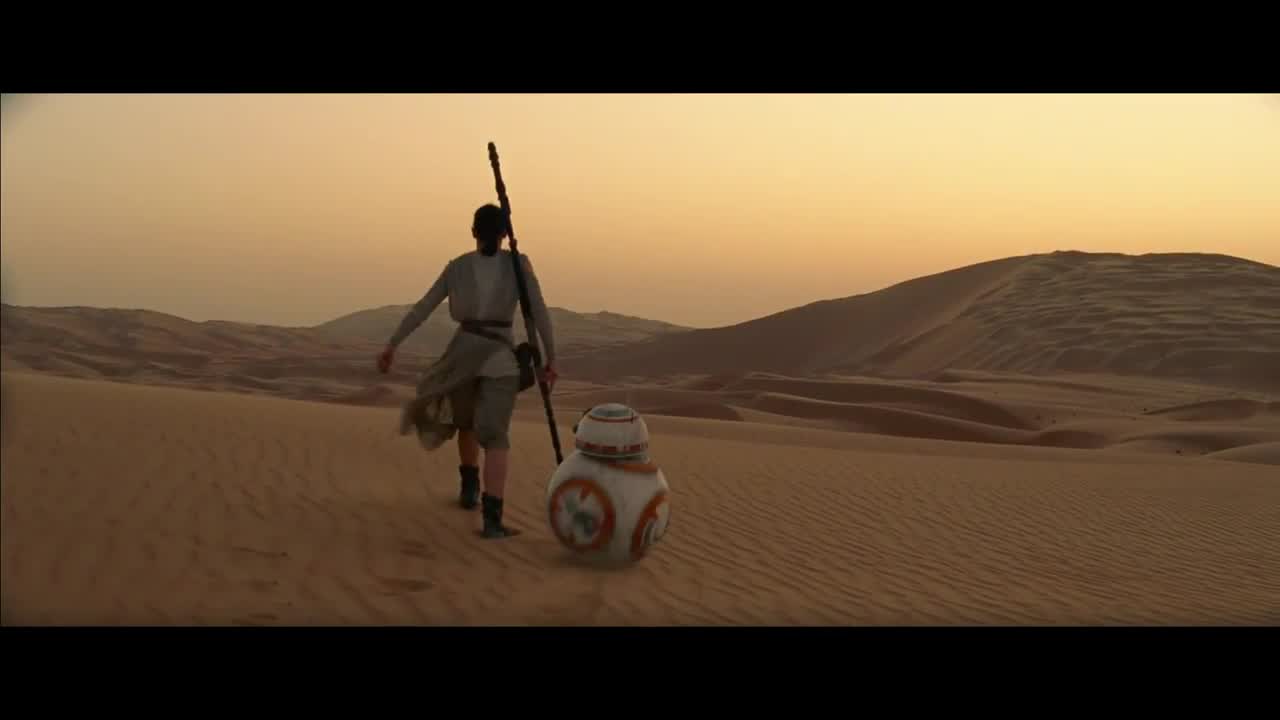 So Episode 7 has smashed opening day box office records and will likely go on to be the top all time earner. Episode 8 will probably repeat that. This can be put down to two things.

And it has to be those two things, because in truth, it’s not a spectacular movie deserving of this kind of praise. Oh and I’ll get lightly spoilery here, so you’re warned.

The new actors coming in to it are quite good. Daisey Ridley, John Boyega, and Oscar Isaac are all fantastic in their roles. Isaac in particular is gonna run away with this in the next film. Adam Driver was less good, but I think that’s down to the writing more than skill, and I’ll cover that in a minute. But of course, there’s returning cast too. Carrie Fisher did well but in particular with her I got the impression the writers had a lot of trouble coming up with her story. Harrison Ford as Han Solo, unfortunately, had been written with far too many forced jokes: he pulled off several of them well, but it began to feel like he was just comic relief. And Mark Hamill… stood there, staring.

But the writing really did let it down. As an overall story it’s a rehash of Star Wars and ROTJ: missing droid with info must make it back to the rebels who can use the info but they’re under threat of a superweapon so the heroes have to mount a rescue for a captured ally there and destroy it vis a vis entering the structure in fighters and shooting up weak spots while the prominent bad guys escape. There was a cantina scene, the will of the Force intervened, someone somewhere learned to trust their feelings, and someone was somebody’s surprise (hint: not at all surprising) offspring.

When you get down into the details, it gets worse, though. There had to have been three or four moments of plot twists, all of which were broadcast miles ahead of time. There’s not (yet) a clear reason as to how exactly the First Order (bad guys) and the Resistance (good guys) rose up from the Empire and Rebellion/Republic, respectively. The action scenes looked good, of course, but it was another case of having them for the sake of having them. They don’t move the story forward at all.

And I gotta get this off my chest: I hate JJ Abrams’s style, because he seems to only have one. It was on display here. Those of you that saw his 2009 Star Trek movie, and now this: remember the scene of Scotty stuck in the water tubes? Compare that to the escaped monsters bit. It has the exact same feel, that emergency-but-lets-make-it-funny, and in a way, the same pacing, and the exact same way in which the day was saved. Plus, what’s with his again not understanding how space works? We sit on the ground watching a planet destroyer destroy a load of planets in other systems, all of which can be seen by the naked eye in the daylight? To say nothing of them probably being lightyears away. Did the same shit in Star Trek. Goddamn. The two films had a lot in common in the writing deficiencies, including the big one.

That big one being that the bad guys were incompetent, dumb shits. Totally unmenacing. No, seriously. They destroyed some planets: ok, that’s bad I guess. Who were on those planets? Why are we invested in this? We’re not. At all. It didn’t even have a moment of Leia trying to plead for them, and then look upset about it, which as a tiny scene added a HUGE amount of gravitas to the destruction of Alderaan, which otherwise we knew zero about. Here, we get… some upset people about to die? Ok. But it doesn’t end there. Hell, killing one village at the start of the film seemed worse than multiple planets.

If you saw it, how many times did someone in the First Order, or representing them, contact someone else to say basically “X HAS ESCAPED.” I counted five, and I’m not joking. Even the Big Bad Baby Sith Lord of Kylo Ren does it at least twice, which really, really prevents you from viewing him with any of the menace you got out of Vader. Incompetent officers leading incompetent soldiers, up and down the chain. Captain Phasma (who I really look forward to seeing in the future), who was supposed to be a massively badass character, doesn’t get to show it. Instead, she helps sabotage the First Order’s setup because she has a blaster to her face. Really! Come on, if she’s supposed to be the next Boba Fett she shouldn’t be afraid of taking one for the team. Instead the writers coughed up an easy out for themselves, and made the bad guys seem less and less competent.

Seriously, the only thing that really made them seem evil was their General guy’s speech that was just channeling Hitler into a truly bad, scenery-chewing performance. I mean holy crap was that overacted. You can’t compensate for the whole army dude. And then, of course, we have a third Death Star. SERIOUSLY! ANOTHER ONE! Can you not come up with something better by now guys? Will Episode 9 have another one?!

On the upside there’s enough reason to want to figure out what the hell was going on that Episode 8 has something to work with. Is Luke now mute, or does he just have a habit of staring at things for weirdly long periods? Who WAS Max von Sydow playing at the start, and should we care? Will Poe Dameron get more chances to be a smartass, cuz he’s really really good at it.

TUNE IN WITH YOUR WALLETS NEXT TIME, KIDS! I do look forward to episode 8 but mostly because it HAS to improve on this, surely. To be honest, I’m more looking forward to Rogue One. A Star Wars film that gives up on the main characters has a hell of a lot of potential to break the mold and start something new.

Because this was not worthy.

So we’re a few days on and I’ve talked to several other people that have seen it. One friend, who saw it and read this, agreed with me basically point for point. One of my preferred (but apparently dying) SciFi sites has decided to announce that viewing TFA is “Better The Second Time”, as if I should be grateful to pay again to see a movie to decide it’s not a disappointment.

And a good friend said, after watching it, that yeah a lot of it wasn’t great, but it was still a good Star Wars adventure and fun.

Ok. On the one hand, yeah, I must clarify that I didn’t sit through the movie completely unamused and disapproving. It had some strong points that were quite enjoyable, like the lightsabre battle towards the end (the second one, hint hint), and the intro sequence for Poe and Kylo. And BB-8 is really quite amusing and enjoyable. So all that said, is it good as a Star Wars movie?

And after asking that semi-rhetorically, I refuse to answer it. The fact that it is Star Wars does not and should not be any sort of pass for it. It’s a C- movie. It has pacing and writing and dialogue issues. It does have great acting, stellar visuals, and so on. Being a part of any existing property (Star Wars, Star Trek, Marvel, Doctor Who, what the hell ever you care to list here) should never be a ‘get-out-of-bad-reviews free’ card. Because no matter who people say the film is for (“kids or Star Wars fans”), we’re all watching it. We can demand better. We SHOULD demand better. There are stellarly-competent directors, writers, actors, etc., in this film industry and they CAN be hired to work on these big, well known movie chains. Nobody should be giving the very weak Avengers 2 a pass and claiming it’s better than the unbelievably good, same-universe-but-less-hyped Guardians of the Galaxy, for instance. And that shouldn’t happen for The Force Awakens.

When you got back and look at them, yeah, the Star Wars films haven’t been top notch. Episode 4, all in all, is probably a B. The Empire Strikes Back, A-. ROTJ, B-. No, not perfect stuff. Better for better storytelling, being groundbreaking for visuals at the time.

Yes, The Force Awakens wasn’t a garbage nightmare film. But the last thing I want is for it… well, I guess now, its successors… to fall into the trap of being made to middling standards because who cares, people will pay for it anyway. That’s the realm that the Transformers movies inhabit, or the Teenage Mutant Ninja Turtles… I guess, Michael Bay’s career in general. Once upon a time, Star Wars challenged all sorts of filmmaking boundaries, admittedly largely on the effects side, but also with determinedly hiring lesser known actors and pushing the boundaries of normal for Hollywood. It shouldn’t be settling for what got pushed out here. There are risks to be taken, adventures in filmmaking to be had!

So in these discussions, a friend who was disappointed asked “What now?” And my answer is “Rogue One”. Because this will be a chance for the Star Wars realm to break out of its own formula and tell a story outside of the too-connected batch that have been told so far. A new director, new actors, new story, everything can be new. They can take some real risks. Will they? Dunno. But damn I hope they do.

I do like Star Wars. I do want Star Wars to be good. But to help it be good, I can’t pretend it’s fine if it’s mediocre, just because it’s a thing I like.