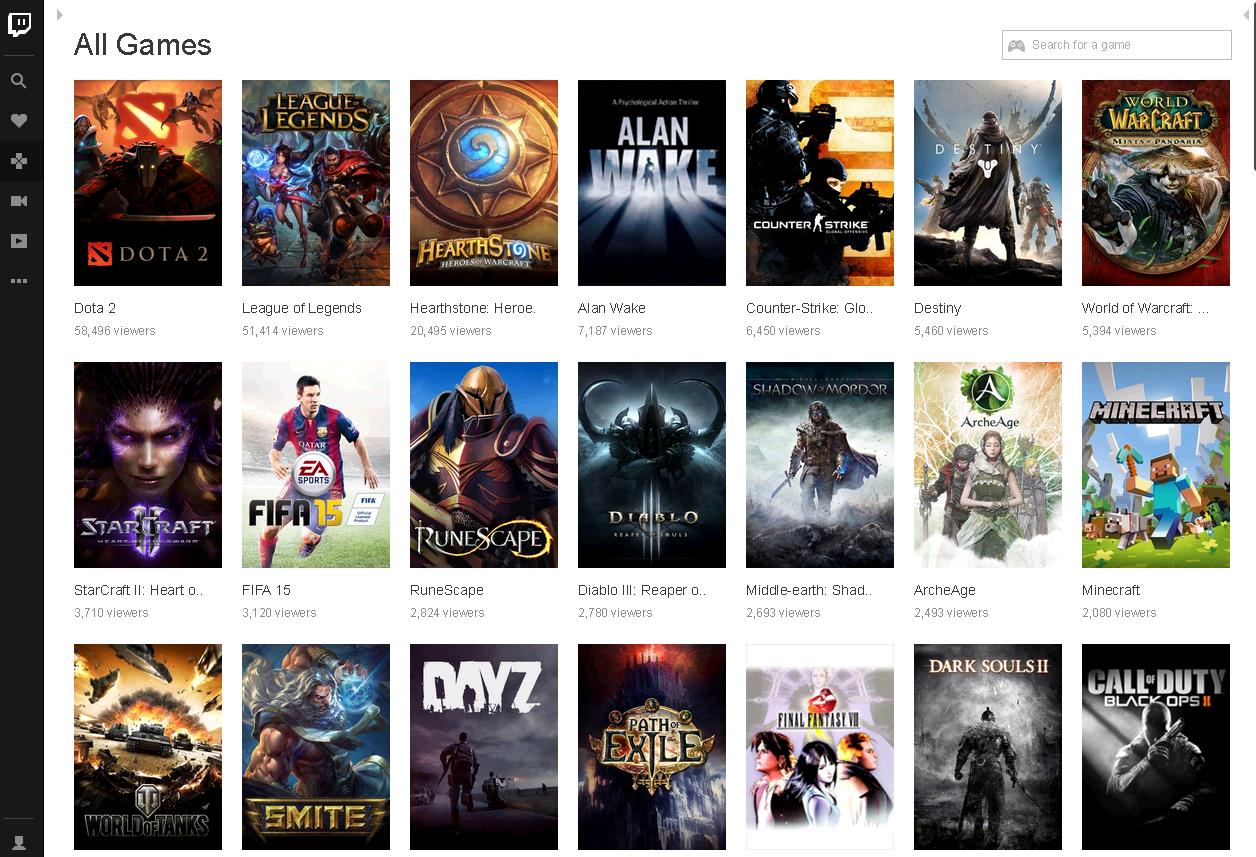 The idea seems weird at first. There’s an entire service out there (several actually) dedicated to letting people stream their gaming over the internet to anyone who’d care to watch. And it’s the caring to watch that gets to you: why watch someone else game when you can game? Yet the trend has grown in a big way. So large that some people are able to make a career of it via subscription fees, donations, and advertising. So large that Amazon bought that big service, Twitch.tv, for $970 million a couple months ago.

I’ve used Twitch for a while, though certainly not to the extent of being able to earn money off of it, nor as prodigiously as some of the larger names in the game. There’s one particular player I’ve spotted and keep half an eye on: just about any time he’s online, there’s 20-25 thousand people watching him do whatever he does, across multiple games. It’s a sufficient number that I can generally tell he’s online simply because the game he plays most suddenly jumps in the “most watched” rankings, as the next most popular players generally only manage a few thousand. But even down to that level, having subscribers willing to drop $5 a month on you, or the odd $3 donation, can add up to a hell of a lot. And why would I want to watch any of them? Some of them just manage to have more fun than I do, I have to say. The one guy has a tendency to get into hilariously complicated situations, and sometimes escapes them, sometimes not. He’ll publish schedules and then play for 8 hours at a time, sometimes. I’m lucky to get an hour in here and there, and never uninterrupted.

It goes beyond that, though. Developers and publishers are turning to live streams for publicity purposes. Star Citizen, about which I’ve harped a great deal here, got into the habit of live streaming their large events at conventions (they are very, very bad at this, EVERY live event has technical issues, so much so it’s become endearing), as well as doing some weekly shows this way. Kerbal Space Program has been streaming sneak peeks at their upcoming releases this way, and asking some of its more popular players to do demos for them. It goes beyond gaming, too: tech companies have started streaming their press conferences and the like. Oculus Rift recently had a large stage interview with its creator and some of its developers.

And then there’s e-sports.

E-sports has been a thing for quite a while now, so much so that there’s a range of games that was made more or less specifically for the purpose. Teams get together and compete in games, which are streamed online, for prizes and cash awards. Sponsorships and the like have pushed it into a multi-billion dollar industry, even if it’s still not especially huge in the grand scheme of things. If I recall correctly, ESPN even aired an event a while back (earning them a great deal of ire from people who don’t really consider this stuff ‘sports’). A year or two ago a group tried to get together a sort of DayZ survival series, wherein players had to attempt to survive in pairs and kill the other teams, all while under the threat of assorted ongoing environmental challenges such as getting to a waiting evac helicopter and not being carpet bombed. Which was actually a great deal of fun to watch. All players were required to be streaming, and there was also a “main” stream with commentators that could switch between players’ views.

Another friend has made use of it for his annual charity work. Each spring he and one of his friends host a 24 hour streamed gaming marathon, with a camera pointed at them and showing off whatever game they’re playing, usually as they drink heavily and in between turning to the camera to beg for money for the charity they support. One particular slurred, impassioned plea for plasma TVs for Africa had me loosening the wallet. But it’s a fun way for them to share their interests and charitable intentions on the global scale: their low-cost solution for this gets them international reach, and an easy way for those of us who can’t be there to share it around.

So in the face of all that, my own streaming is pretty crappy. It’s been interesting to play with the technologies, but more interesting to play with the social aspects of this. In one instance I lucked into early access in a game and was streaming it so my underprivileged peers could live vicariously through me. Word spread beyond my assorted online friends and into a stack of my real friends who started tuning in: one said they fired up my stream, heard me spewing a stack of obscenities, and said it was just like spending time with me but watching spaceships. But since I had a hot mic I was answering questions from a side monitor in chat. People could readily ask what is X like, or how does Y work, and I could experiment with it and answer live. Which was cool.

I only really get into all of this because I noticed the other day that I’ve started watching Twitch a great deal more often. Whereas I used to go looking for funny videos on Youtube to fill in background noise on my PC while I work, I now tend to go first to Twitch so I can listen in on one or another of those players that have gathered my interest. Sometimes it’s just for the comedy, sometimes to pick up new ideas for playing games myself, and sometimes when inspiration is needed. There’s hundreds of different games being played by thousands of streamers, all the time, live. There’s always something going on.

Not so much as to want to throw money at them, mind you. Still can’t wrap my head around that bit.